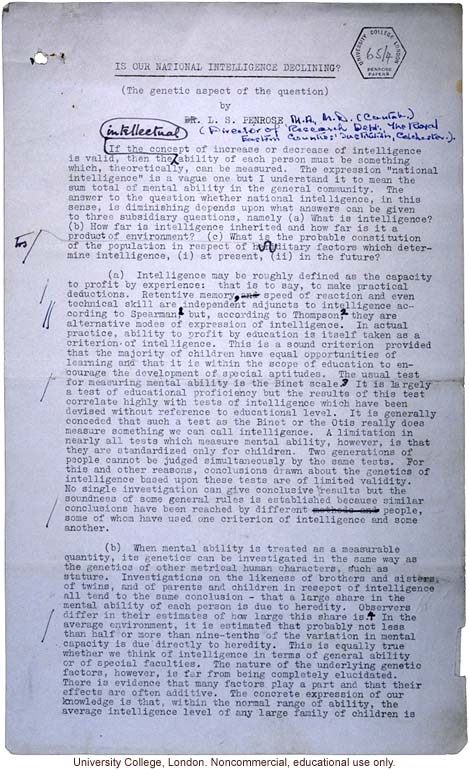 [stamped]University College London Penrose Papers 65/4[end stamp] [underscore]Is Our National Intelligence Declining?[end underscore] (The genetic aspect of the question) by L.S. Penrose [handwritten] M.A., M.D. (Cantab.) (Director of Research Dept.: The Royal Eastern Counties Institution, Colchester.).[end handwritten] If the concept of increase or decrease of intelligence is valid, then the [handwritten insert]intellectual[end handwritten insert] ability of each person must be something which, theoretically, can be measured. The expression "national intelligence" is a vague one but I understand it to mean the sum total of mental ability in the general community. The answer to the question whether national intelligence, in this sense, is diminishing depends upon what answers can be given to three subsidiary questions, namely (a) What is intelligence? (b) How far is intelligence inherited and how far is it a product of environment? (c) What is the probably constitution of the population in respect of hereditary factors which determine intelligence, (i) at present, (ii) in the future? (a) Intelligence may be rougly defined as the capacity to profit by experience: that is to say, to make practical deductions. Retentive memory, speed of reaction and even technical skill are independent adjuncts to intelligence according to Spearman[superior 1] but, according to Thompson[superior 2], they are alternative modes of expression of intelligence. In actual practice, ability to profit by education is itself taken as a criterion of intelligence. This is a sound criterion provided that the majority of children have equal opportunities of learning and that it is within the scope of education to encourage the development of special aptitudes. The usual test for measuring mental ability is the Binet scale[superior 3]. It is largely a test of educational proficiency but the results of this test correlate highly with tests of intelligence which have been devised without reference to educational level. It is generally conceded that such a test as the Binet or the Otis really does measure something we can call intelligence. A limitation in nearly all tests which measure mental ability, however, is that they are standardized only for children. Two generations of people cannot be judged simultaneously by the same tests. For intelligence based upon these tests are of limited validity. No single investigation can give conclusive results but the conclusions have been reached by different people, some of whom have used one criterion of intelligence and some another. (b) When mental ability is treated as a measurable quantity, its genetics can be investigated in the same way as the genetics of other metrical human characters, such as stature. Investigations on the likeness of brothers and sisters all tend to the same conclusion - that a large share in the mental ability of each person is due to heredity. Observers differ in their estimates of how large this share is.[superior 4] In the average environment, it is estimated that probably not less than half or more than nine-tenths of the variation in mental capacity is due directly to heredity. This is equally true whether we think of intelligence in terms of general ability or of special faculties. The nature of the underlying genetic factors, however, is far from being completely elucidated. There is evidence that many factors play a part and that their effects are often additive. The concrete expression of our knowledge is that, within the normal range of ability, the average intelligence level of any large family of children is [end]
Copyright 1999-2004: Cold Spring Harbor Laboratory; American Philosophical Society; Truman State University; Rockefeller Archive Center/Rockefeller University; University of Albany, State University of New York; National Park Service, Statue of Liberty National Monument; University College, London; International Center of Photography; Archiv zur Geschichte der Max-Planck-Gesellschaft, Berlin-Dahlem; and Special Collections, University of Tennessee, Knoxville.
The images and text in this Archive are solely for educational and scholarly uses. The materials may be used in digital or print form in reports, research, and other projects that are not offered for sale. Materials in this archive may not be used in digital or print form by organizations or commercial concerns, except with express permission.