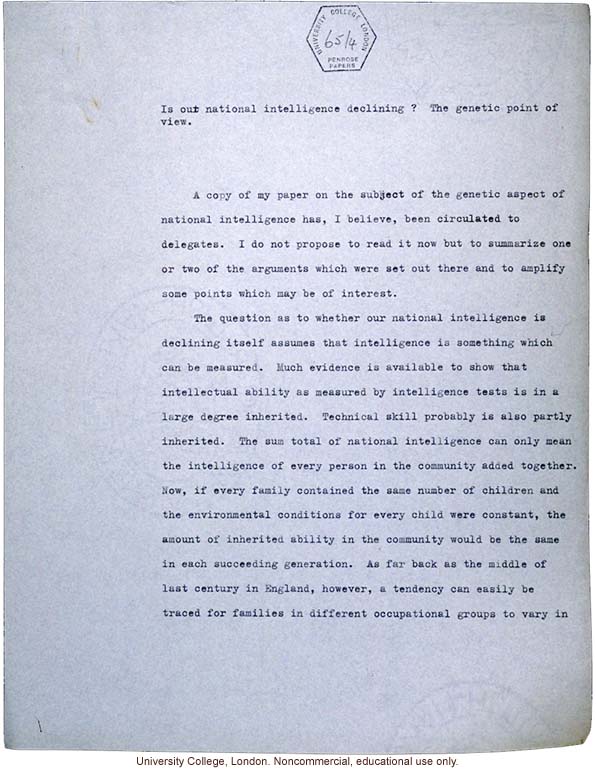 [stamped]University College London 65/4 Penrose Papers[end stamp] Is our national intelligence declining? The genetic point of view. A copy of my paper on the subject of the genetic aspect of national intelligence has, I believe, been circulated to delegates. I do not propose to read it now but to summarize one or two of the arguments which were set out there and to amplify some points which may be of interest. The question as to whether our national intelligence may be declining itself assumes intelligence is something which can be measured. Much evidence is available to show that intellectual ability as measured by intelligence tests is in a large degree inherited. Technical skill probably is also partly inherited. The sum total of national intelligence can only mean the intelligence of every person in the community added together. Now, if every family contained the same number of children and the environmental conditions for every child were constant, the amount of inherited ability in the community would be the same in each succeeding generation. As far back as the middle of the last century in England, however, a tendency can easily be traced for families in different occupational groups to vary in [end]
Copyright 1999-2004: Cold Spring Harbor Laboratory; American Philosophical Society; Truman State University; Rockefeller Archive Center/Rockefeller University; University of Albany, State University of New York; National Park Service, Statue of Liberty National Monument; University College, London; International Center of Photography; Archiv zur Geschichte der Max-Planck-Gesellschaft, Berlin-Dahlem; and Special Collections, University of Tennessee, Knoxville.
The images and text in this Archive are solely for educational and scholarly uses. The materials may be used in digital or print form in reports, research, and other projects that are not offered for sale. Materials in this archive may not be used in digital or print form by organizations or commercial concerns, except with express permission.