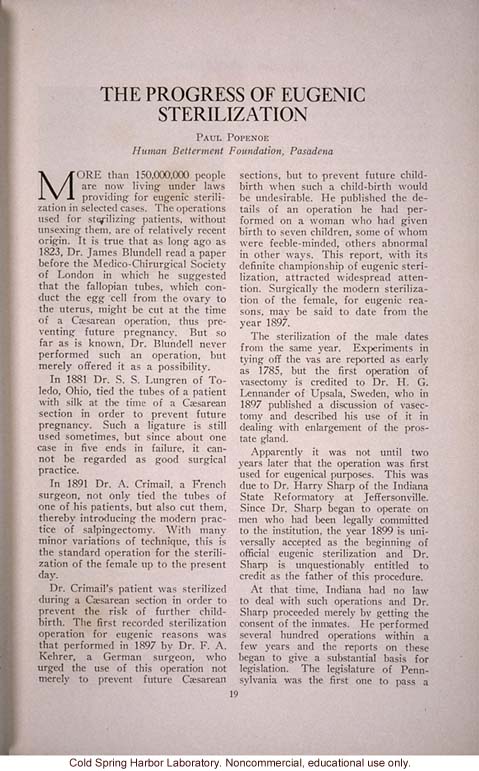 The Progress of Eugenic Sterilization Paul Popenoe Human Betterment Foundation, Pasadena More than 150,000,000 people are now living under laws providing for eugenic sterilization in selected cases. The operations used for sterilizing patients, without unsexing them, are of relatively recent origin. It is true that as long ago as 1823, Dr. James Blundell read a paper before the Medico-Chirurgical Society of London in which he suggested that the fallopian tubes, which conduct the egg cell from the ovary to the uterus, might be cut at the time of a Caesarean operation, thus preventing future pregnancy. But so far as is known, Dr. Blundell never performed such an operation, but merely offered it as a possibility. In 1881 Dr. S. S. Lungren of Toledo, Ohio, tied the tubes of a patient with silk at the time of a Caesarean section in order to prevent future pregnancy. Such a ligature is still used sometimes, but since about one case in five ends in failure, it cannot be regarded as good surgical practice. In 1891 Dr. A Crimail, a French surgeon, not only tied the tubes of one of his patients, but also cut them, thereby introducing the modern practice of salpingectomy. With many minor variations or technique, this is the standard operation for the sterilization of the female up to the present day. Dr. Crimail's patient was sterilized during a Caesarean section in order to prevent the risk of further childbirth. The first recorded sterilization operation for eugenic reasons was that performed in 1897 by Dr. F. A. Kehrer, a German surgeon who urged the use of this operation not merely to prevent future Caesarean sections, but to prevent future child-birth when such a child-birth would be undesirable. He published the details of an operation he had performed on a woman who had given birth to seven children, some of whom were feeble-minded, other abnormal in other ways. This report, with its definite championship of eugenic sterilization, attracted widespread attention. Surgically the modern sterilization of the female, for eugenic reasons, may be said to date from the year 1897. The sterilization of the male dates from the same year. Experiments in tying off the vas are reported as early as 1785, but the first operation of vasectomy is credited to Dr. H. G. Lennander of Upsala, Sweden, who in 1897 published a discussion of vasectomy and described his use of it in dealing with the enlargement of the prostate gland. Apparently it was not until two years later that the operation was first used for eugenic purposes. This was due to Dr. Harry Sharp of the Indiana State Reformatory at Jeffersonville. Since Dr. Sharp began to operate on men who had been legally committed to the institution, the 1899 is universally accepted as the beginning of official eugenic sterilization and Dr. Sharp is unquestionable entitled to credit as the father of this procedure. At that time, Indiana had no law to deal with such operations and Dr. Sharp proceeded merely by getting the consent of the inmates. He performed several hundred operations within a few years and the reports on these began to give a substantial basis for legislation. The legislature of Pennsylvania was the first one to a pass a 19 [end]
Copyright 1999-2004: Cold Spring Harbor Laboratory; American Philosophical Society; Truman State University; Rockefeller Archive Center/Rockefeller University; University of Albany, State University of New York; National Park Service, Statue of Liberty National Monument; University College, London; International Center of Photography; Archiv zur Geschichte der Max-Planck-Gesellschaft, Berlin-Dahlem; and Special Collections, University of Tennessee, Knoxville.
The images and text in this Archive are solely for educational and scholarly uses. The materials may be used in digital or print form in reports, research, and other projects that are not offered for sale. Materials in this archive may not be used in digital or print form by organizations or commercial concerns, except with express permission.