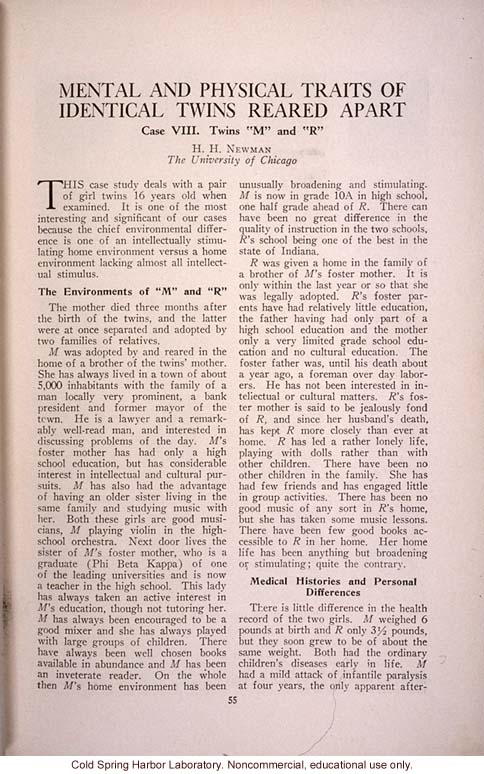 Mental and Physical Traits of Identical Twins Reared Apart Case VIII. Twins "M" and "R" H. H. Newman The University of Chicago This case study deals with a pair of girl twins 16 years old when examined. It is one of the most interesting and significant of our cases because the chief environmental difference is one of intellectually stimulating home environment versus a home environment lacking almost all intellectual stimulus. The Environments of "M" and "R" The mother died three months after the birth of the twins, and the latter were at once adopted by two families of relatives. M was adopted by and reared in the home of a brother of the twins' mother. She has always lived in a town of about 5,000 inhabitants with the family of a man locally very prominent, a bank president and former mayor of the town. He is a lawyer and a remarkably well-read man, and interested in discussing problems of the day. M's foster mother has had only a high school education, but has considerable interest in intellectual and cultural pursuits. M has also had the advantage of having an older sister living in the same family and studying music with her. Both these girls are good musicians, M playing violin in the high school orchestra. Next door lives the sister of M's foster mother, who is a graduate (Phi Beta Kappa) of one of the leading universities and is now a teacher in the high school. This lady has always taken an active interest in M's education, though not tutoring her. M has always been encouraged to be a good mixer and she has always played with large groups of children. There have always been well chosen books available in abundance and M has been an inveterate reader. On the whole M's home environment has been unusually broadening and stimulating. M is now in grade 10A in high school, one half grade ahead of R. There can have been no great difference in the quality of instruction in the two schools, R's school being one of the best in the state of Indiana. R was given a home in the family of a brother of M's foster mother. It is only within the last year or so that she was legally adopted. R's foster parents have had relatively little education, the father having had only part of a high school education and the mother only a very limited grade school education and no cultural education. The foster father was, until his death about a year ago, a foreman over day laborers. He has not been interested in intellectual or cultural matters. R's foster mother is said to be jealously fond of R, and since her husband's death, has kept R more closely than ever at home. R has led a rather lonely life, playing with dolls rather than with other children. There have been no other children in the family. She has had few friends and has engaged little in group activities. There has be no good music of any sort in R's home, but she has taken some music lessons. There have been few good books accessible for R in her home. Her home life has been anything but broadening or stimulating; quite the contrary. Medical Histories and Personal Differences There is little difference in the health record of the two girls. M weighed 6 pounds at birth and R only 3 1/2 pounds, but they soon grew to be of about the same weight. Both had the ordinary children's diseases early in life. M had a mild attack of infantile paralysis at four years, the only apparent after- 55 [end]
Copyright 1999-2004: Cold Spring Harbor Laboratory; American Philosophical Society; Truman State University; Rockefeller Archive Center/Rockefeller University; University of Albany, State University of New York; National Park Service, Statue of Liberty National Monument; University College, London; International Center of Photography; Archiv zur Geschichte der Max-Planck-Gesellschaft, Berlin-Dahlem; and Special Collections, University of Tennessee, Knoxville.
The images and text in this Archive are solely for educational and scholarly uses. The materials may be used in digital or print form in reports, research, and other projects that are not offered for sale. Materials in this archive may not be used in digital or print form by organizations or commercial concerns, except with express permission.