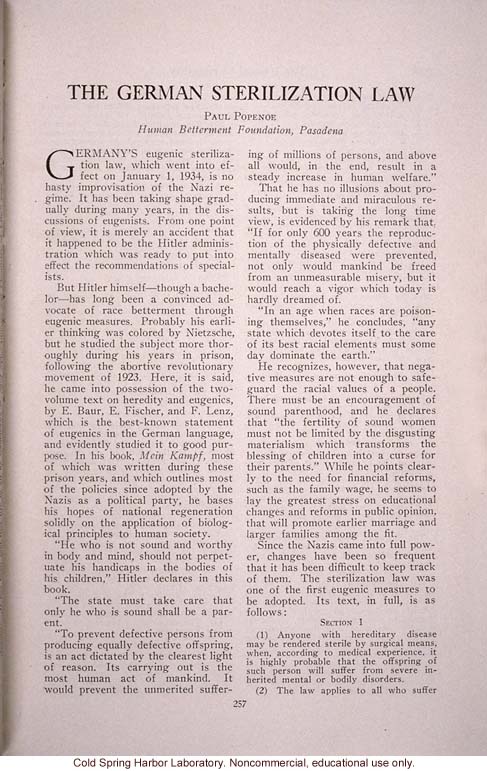 The German Sterilization Law Paul Popenoe Human Betterment Foundation, Pasadena Germany's eugenic sterilization law, which went into effect on January 1, 1934, is no hasty improvisation of the Nazi regime. It has been taking shape gradually during many years, in the discussions of eugenicists. From one point of view, it is merely an accident that it happened to be the Hitler administration which was ready to put into effect the recommendations of specialists. But Hitler himself - though a bachelor - has long been a convinced advocate of race betterment through eugenic measures. Probably his earlier thinking was colored by Nietzsche, but he studied the subject more thoroughly during his years in prison, following the abortive revolutionary movement of 1923. Here, it is said, he came into possession of the two-volume text on heredity and eugenics, by E. Baur, E. Fischer, and F. Lenz, which is the best-known statement of eugenics in the German language, and evidently studied it to good purpose. In his book, [italics]Mein Kampf[end italics], most of which was written during these prison years, and which outlines most of the policies since adopted by the Nazis as a political party, he bases his hopes of national regeneration solidly on the application of biological principles to human society. "He who is not sound and worthy in body and mind, should not perpetuate his handicaps in the bodies of his children," Hitler declares in this book. "The state must take care that only he who is sound shall be a parent. "To prevent defective persons from producing equally defective offspring, is an act dictated by the clearest light of reason. Its carrying out is the most human act of mankind. It would prevent the unmerited suffering of millions of persons, and above all would, in the end, result in a steady increase in human welfare." That he has no illusions about producing immediate and miraculous results, but is taking the long time view, is evidenced by his remark that "If for only 600 years the reproduction of the physically defective and mentally diseased were prevented, not only would mankind be freed from an unmeasurable misery, but it would reach a vigor which today is hardly dreamed of. "In an age when races are poisoning themselves," he concludes, "any state which devotes itself to the care of its best racial elements must some day dominate the earth." He recognizes, however, that negative measures are not enough to safeguard the racial values of a people. There must be an encouragement of sound parenthood, and he declares that "the fertility of sound women must not be limited by the disgusting materialism which transforms the blessing of children into a curse for their parents." While he points clearly to the need for financial reforms, such as the family wage, he seems to lay the greatest stress on educational changes and reforms in public opinion, that will promote earlier marriage and larger families among the fit. Since the Nazis came into full power, changes have been so frequent that it has been difficult to keep track of them. The sterilization law was one of the first eugenic measures to be adopted. Its text, in full, is as follows: Section I (1) Anyone with hereditary disease may be rendered sterile by surgical means, when, according to medical experience, it is highly probably that the offspring of such person will suffer from sever inherited mental of bodily disorders. (2) The law applies to all who suffer 257 [end]
Copyright 1999-2004: Cold Spring Harbor Laboratory; American Philosophical Society; Truman State University; Rockefeller Archive Center/Rockefeller University; University of Albany, State University of New York; National Park Service, Statue of Liberty National Monument; University College, London; International Center of Photography; Archiv zur Geschichte der Max-Planck-Gesellschaft, Berlin-Dahlem; and Special Collections, University of Tennessee, Knoxville.
The images and text in this Archive are solely for educational and scholarly uses. The materials may be used in digital or print form in reports, research, and other projects that are not offered for sale. Materials in this archive may not be used in digital or print form by organizations or commercial concerns, except with express permission.