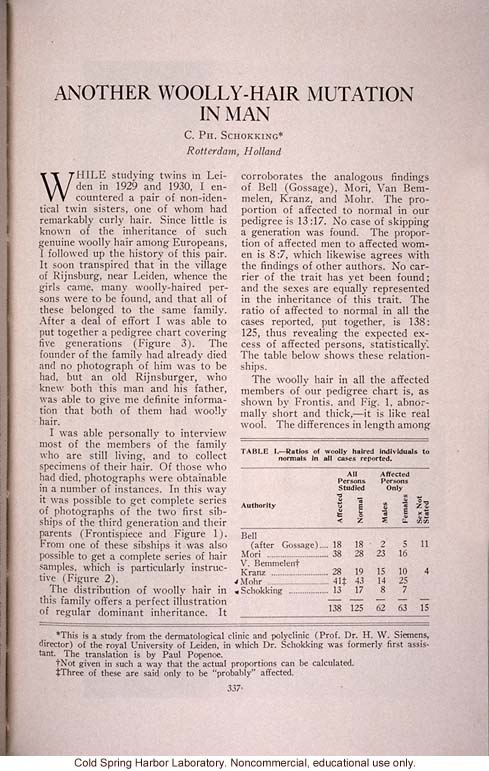 Another Woolly-Hair Mutation in Man C. Ph. Schokking* Rotterdam, Holland While studying twins in Leiden in 1929 and 1930, I encountered a pair of non-identical twin sisters, one of whom had remarkably curly hair. Since little is know of the inheritance of such genuine woolly hair among Europeans, I followed up the history of this pair. It soon transpired that in the village of Rijnsburg, near Leiden, whence the girls came, many woolly-haired persons were to be found, and that all of these belonged to the same family. After a deal of effort I was able to put together a pedigree chart covering five generations (Figure 3). The founder of the family had already died and no photograph of him was to be had, but an old Rijnsburger, who knew both this man and his father, was able to give me definite information that both of them had woolly hair. I was able personally to interview most of the members of the family who are still living, and to collect specimens of their hair. Of those who had died, photographs were obtainable in a number of instances. In this way it was possible to get complete series of photographs of the two first siblings of the third generation and their parents (Frontispiece and Figure 1). From one of these sibships it was also possible to get a complete series of hair samples, which is particularly instructive (Figure 2). The distribution of woolly hair in this family offers a perfect illustration of regular dominant inheritance. It corroborates the analogous findings of Bell (Gossage), Mori, Van Bemmelen, Kranz, and Mohr. The proportion of affected to normal in our pedigree is 13:17. No case of skipping a generation was found. The proportion of affected men to affected women is 8:7, which likewise agrees with the findings of other authors. No carrier of the trait has yet been found; and the sexes are equally represented in the inheritance of this trait. The ratio of affected to normal in all the cases reported, put together, is 138:125, thus revealing the expected excess of affected persons, statistically. The table below shows these relationships. The woolly hair in all the affected members of our pedigree chart is, as shown by Frontis, and Fig. 1, abnormally short and thick, -- it is like real wool. The differences in length among [double hairline score column width] Table I. - Ratios of woolly haired individuals to normals in all cases reported. & &All Persons Studied & Affected Persons Only Authority & Affected & Normal & Males & Females & Sex Not Stated Bell (after Gossage) . . . & 18 & 18 & 2 & 5 & 11 Mori . . . & 38 & 28 & 23 & 16 & V. Bemmelen[dagger] Kranz . . . & 28 & 19 & 15 & 10 & 4 Mohr . . . & 41[double dagger] & 43 & 14 & 25 & & Schokking . . . & 13 & 17 & 8 & 7 & & & 138 & 125 & 62 & 63 & 15 [end table rule] [double hairline score page width] *This study from the dermatalogical clinic and polyclinic (Prof. Dr. H. W. Siemens, director) of the royal University of Leiden, in which Dr. Schokking was formerly first assistant. The translation is by Paul Popenoe. [dagger]Not given in such a way that the actual proportions can be calculated. [double dagger]Three of these are said only to be "probably" affected. 337 [end]
Copyright 1999-2004: Cold Spring Harbor Laboratory; American Philosophical Society; Truman State University; Rockefeller Archive Center/Rockefeller University; University of Albany, State University of New York; National Park Service, Statue of Liberty National Monument; University College, London; International Center of Photography; Archiv zur Geschichte der Max-Planck-Gesellschaft, Berlin-Dahlem; and Special Collections, University of Tennessee, Knoxville.
The images and text in this Archive are solely for educational and scholarly uses. The materials may be used in digital or print form in reports, research, and other projects that are not offered for sale. Materials in this archive may not be used in digital or print form by organizations or commercial concerns, except with express permission.