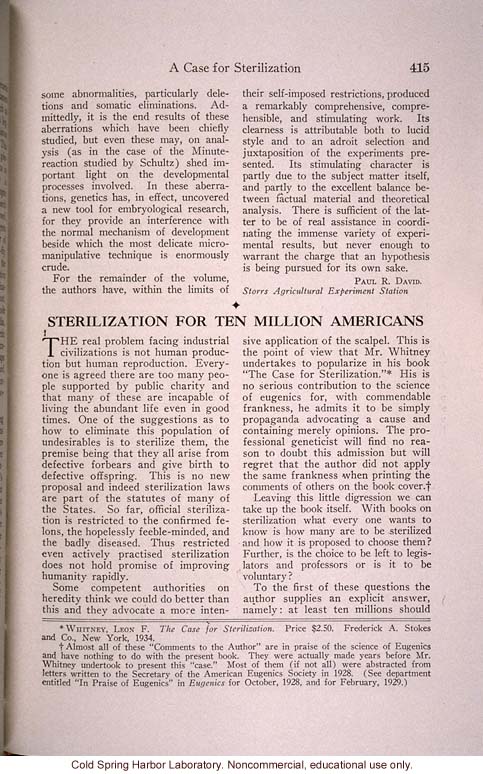 A Case for Sterilization 415 some abnormalities, particularly deletions and somatic eliminations. Admittedly, it is the end results of these aberrations which have been chiefly studied, but even these may, on analysis (as in the case of the Minute-reaction studied by Schultz) shed important light on the developmental processes involved. In these aberrations, genetics has, in effect, uncovered a new tool for embryonic research, for they provide an interference with the normal mechanism of development beside which the most delicate micromanipulative technique is enormously crude. For the remainder of the volume, the authors have, within the limits of their self-imposed restrictions, produced a remarkably comprehensive, comprehensible, and stimulating work. Its clearness is attributable both to lucid style and to an adroit selection and juxtaposition of the experiments presented. Its stimulating character is partly due to the subject matter itsef, and partly to the excellent balance between factual material and theoretical analysis. There is sufficient of the latter to be of real assistance in coordinating the immense variety of experimental results, but never enough to warrant the charge that an hypothesis is being pursued for its won sake. Paul R. David. [italics]Storrs Agricultural Experiment Station[end italics] [centered graphic] Sterilization for Ten Million Americans The real problem facing industrial civilizations is not human production but human reproduction. Everyone is agreed there are too many people supported by public charity and that many of these are incapable of living the abundant life even in good times. One of the suggestions as to how to eliminate this population of undesirables is to sterilize them, the premise being that they all arise from defective forbears and give birth to defective offspring. This is no new proposal and indeed sterilization laws are part of the statutes of many of the States. So far, official sterilization is restricted to the confirmed feeble-minded, the hopelessly feeble-minded, and the badly diseased. Thus restricted even actively practised sterilization does not hold promise of improving humanity rapidly. Some competent authorities on heredity think we could do better than this and they advocate a more intensive application of the scalpel. This is the point of view that Mr. Whitney undertakes to popularize in his book "The Case for Sterilization."* His is no serious contribution to the science of eugenics for, with commendable frankness, he admits it to be simply propaganda advocating a cause and containing merely opinions. The professional geneticist will find no reason to doubt this admission but will regret that the author did not apply the same frankness when printing the comments of others on the book cover.[dagger] Leaving this little digression we can take up the book itself. With books on sterilization what every one wants to know is how many are to be sterilized and how it is proposed to choose them? Further, is the choice to be left to legislators and professors or is it to be voluntary? To the first of these questions the author supplies an explicit answer, namely: at least ten millions should [double score width of page] [footnotes]*Whitney, Leon F. [italics]The Case for Sterilization.[end italics] Price $2.50. Frederick A. Stokes and Co., New York, 1934. [dagger]Almost all of these "Comments to the Author" are in praise of the science of Eugenics and have nothing to do with the present book. They were actually made years before Mr. Whitney undertook to present this "case." Most of them (if not all) were abtracted from letters written to the Secretary of the American Eugenics Society in 1928. (See deparment entitled "In Praise of Eugenics" in [italics]Eugenics[end italics] for October, 1928, and for February, 1929.) [end]
Copyright 1999-2004: Cold Spring Harbor Laboratory; American Philosophical Society; Truman State University; Rockefeller Archive Center/Rockefeller University; University of Albany, State University of New York; National Park Service, Statue of Liberty National Monument; University College, London; International Center of Photography; Archiv zur Geschichte der Max-Planck-Gesellschaft, Berlin-Dahlem; and Special Collections, University of Tennessee, Knoxville.
The images and text in this Archive are solely for educational and scholarly uses. The materials may be used in digital or print form in reports, research, and other projects that are not offered for sale. Materials in this archive may not be used in digital or print form by organizations or commercial concerns, except with express permission.