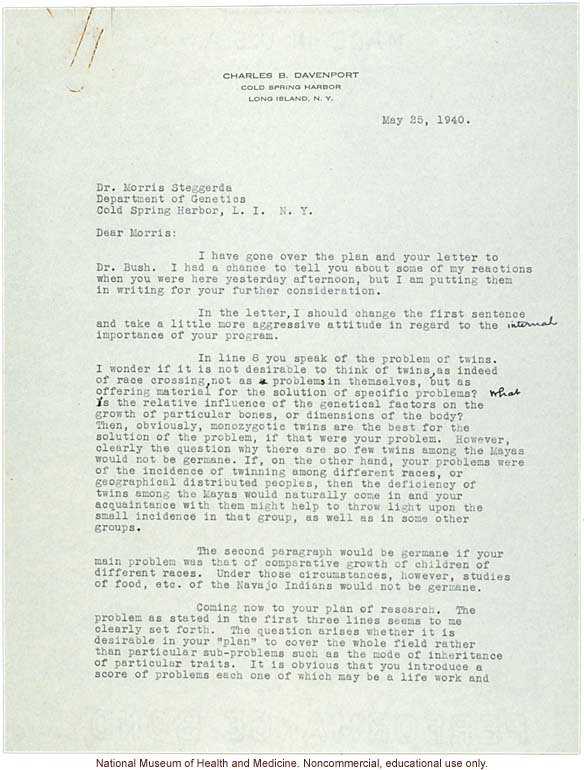 Charles B. Davenport Cold Spring Harbor Long Island, N. Y. May 25, 1940. Dr. Morris Steggerda Department of Genetics Cold Spring Harbor, L. I. N. Y. Dear Morris: I have gone over the plan and your letter to Dr. Bush. I had a chance to tell you about some of my reactions when you were here yesterday afternoon, but I am putting them in writing for your further consideration. In the letter, I should change the first sentence and take a little more aggressive attitude in regard to the internal importance of your program. In line 8 you speak of the problem of twins. I wonder if it is not desirable to think of twins, as indeed of race crossing, not as problems in themselves, but as offering material for the solution of specific problems? What is the relative influence of the genetical factors on the growth of particular bones, or dimensions of the body? Then, obviously monozygotic twins are the best for the solution of the problem, if that were your problem. However, clearly the question why there are so few twins among the Mayas would not be germane. If, on the other hand, your problems were of the incidence of twinning among different races, or geographical distributed peoples, then the deficiency of twins among the Mayas would naturally come in and your acquaintance with them might help to throw light upon the small incidence in that group, as well as in some other groups. The second paragraph would be germane if your main problem was that of comparative growth of children of different races. Under those circumstances, however, studies of food, etc. of the Navajo Indians would not be germane. Coming now to your plan of research. The problem as stated in the first three lines seems to me clearly set forth. The question arises whether it is desirable in your "plan" to cover the whole field rather than particular sub-problems such as the mode of inheritance of particular traits. It is obvious that you introduce a score of problems each one of which may be a life work and [end]
Copyright 1999-2004: Cold Spring Harbor Laboratory; American Philosophical Society; Truman State University; Rockefeller Archive Center/Rockefeller University; University of Albany, State University of New York; National Park Service, Statue of Liberty National Monument; University College, London; International Center of Photography; Archiv zur Geschichte der Max-Planck-Gesellschaft, Berlin-Dahlem; and Special Collections, University of Tennessee, Knoxville.
The images and text in this Archive are solely for educational and scholarly uses. The materials may be used in digital or print form in reports, research, and other projects that are not offered for sale. Materials in this archive may not be used in digital or print form by organizations or commercial concerns, except with express permission.