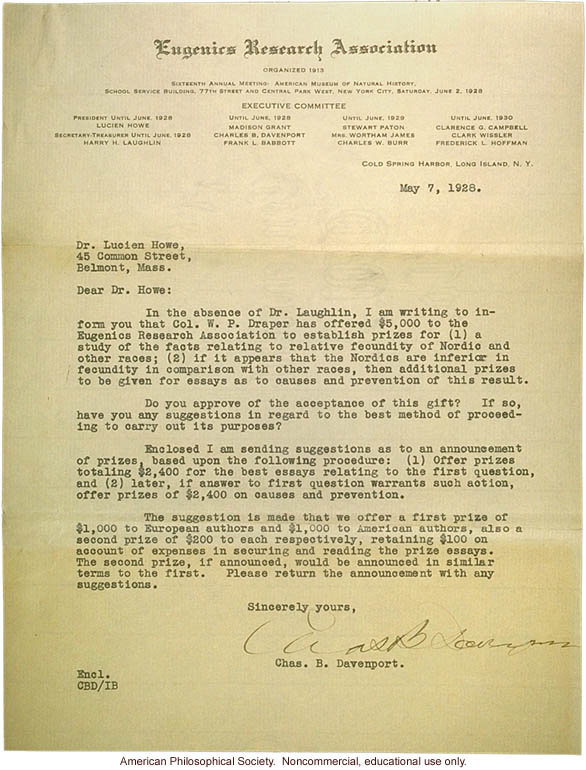 Eugenics Research Association Organized 1913 Sixteenth Annual Meeting, American Museum of Natural History, School Services Building, 77th Street and Central Park West, New York City, Saturday, June 2, 1928 President Until June 1928 Lucien Howe Secretary-Treasurer Until June 1928 Harry H. Laughlin Executive Committee Until June, 1928 Madison Grant Charles B. Davenport Frank L. Babbott Until June, 1929 Stewart Paton Mrs. Wortham James Charles W. Burr Until June, 1930 Clarence G. Campbell Clark Wissler Frederick L. Hoffman Cold Spring Harbor, Long Island, N.Y. May 7, 1928. Dr. Lucien Howe, 45 Common Street, Belmont, Mass. Dear Dr. Howe, In the absence of Dr. Laughlin, I am writing to inform you that Col. W. P. Draper has offered $5,000 to the Eugenics Research Association to establish prizes for (1) a study of the facts relating to relative fecundity of Nordic and other races; (2) if it appears that the Nordics are inferior in fecundity in comparison with other races, then additional prizes to be given for essays as to causes and prevention of this result. Do you approve of the acceptance of this gift? If so, do you have any suggestions in regard to the best method of proceeding to carry out its purposes? Enclosed I am sending suggestions as to an announcement of prizes, based upon the following procedure: (1) Offer prizes totaling $2,400 for the best essays relating to the first question, and (2) later, if answer to first question warrants such action, offer prizes of $2,400 on causes and prevention. The suggestion is made that we offer a first prize of $1,000 to American authors, also a second prize of $200 to each respectively, retaining $100 on account of expenses in securing and reading the prize essays. The second prize, if announced, would be announced in similar terms to the first. Please return the announcement with any suggestions. Sincerely yours, (signed) Charles B. Davenport. Encl. CBD/IB
Copyright 1999-2004: Cold Spring Harbor Laboratory; American Philosophical Society; Truman State University; Rockefeller Archive Center/Rockefeller University; University of Albany, State University of New York; National Park Service, Statue of Liberty National Monument; University College, London; International Center of Photography; Archiv zur Geschichte der Max-Planck-Gesellschaft, Berlin-Dahlem; and Special Collections, University of Tennessee, Knoxville.
The images and text in this Archive are solely for educational and scholarly uses. The materials may be used in digital or print form in reports, research, and other projects that are not offered for sale. Materials in this archive may not be used in digital or print form by organizations or commercial concerns, except with express permission.