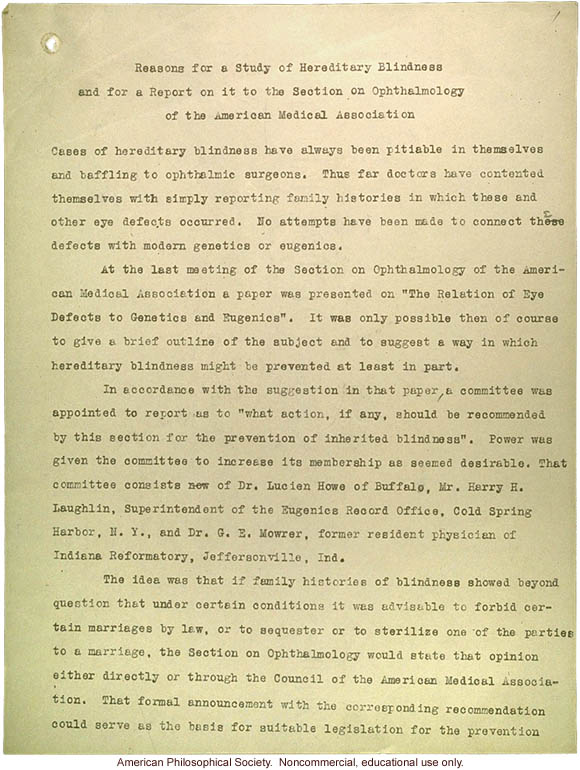 Reasons for a Study of Hereditary Blindness and for a Report on it to the Section on Ophthalmology of the American Medical Association Cases of hereditary blindness have always been pitiable in themselves and baffling to ophthalmic surgeons. Thus far doctors have contented themselves with simply reporting family histories in which these and other eye defects occurred. No attempts have been made to connect these defects with modern genetics or eugenics. At the last meeting of the Section on Ophthalmology of the American Medical Association a paper was presented on "The Relation of Eye Defects to Genetics and Eugenics". It was only possible then of course to give a brief outline of the subject and to suggest a way in which hereditary might be prevented at least in part. In accordance with the suggestion in that paper, a committee was appointed to report as to "what action, if any, should be recommended by this section for the prevention of inherited blindness". Power was given the committee to increase its membership as seemed desirable. That committee consists now of Dr. Lucien Howe of Buffalo, Mr. Harry H. Laughlin, Superintendent of the Eugenics Record Office, Cold Spring Harbor, N.Y., and Dr. G. E. Mowrer, former resident physician of Indiana Reformatory, Jeffersonville, Ind. The idea was that if family histories of blindness showed beyond question that under certain conditions it was advisable to forbid certain marriages by law, or to sequester or to sterilize one of the parties to a marriage, the Section on Ophthalmology would state that opinion either directly or through the Council of the American Medical Association. That formal announcement with the corresponding recommendation could serve as the basis for suitable legislation for the prevention
Copyright 1999-2004: Cold Spring Harbor Laboratory; American Philosophical Society; Truman State University; Rockefeller Archive Center/Rockefeller University; University of Albany, State University of New York; National Park Service, Statue of Liberty National Monument; University College, London; International Center of Photography; Archiv zur Geschichte der Max-Planck-Gesellschaft, Berlin-Dahlem; and Special Collections, University of Tennessee, Knoxville.
The images and text in this Archive are solely for educational and scholarly uses. The materials may be used in digital or print form in reports, research, and other projects that are not offered for sale. Materials in this archive may not be used in digital or print form by organizations or commercial concerns, except with express permission.