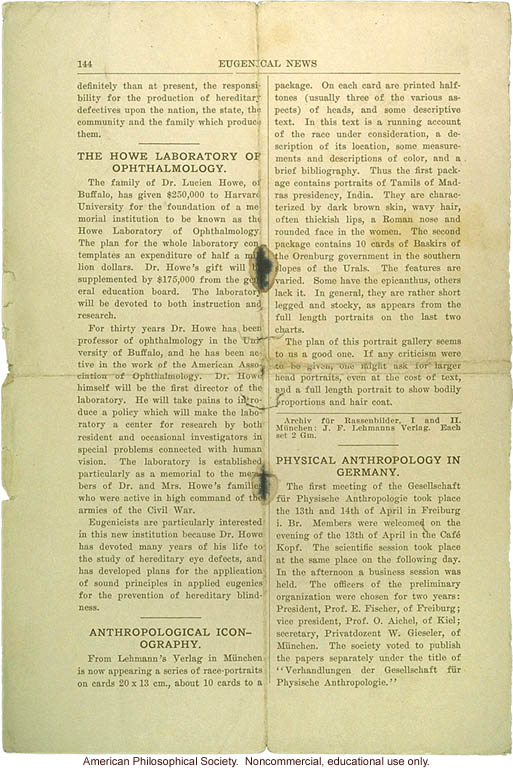 144 Eugenical News definitely than at present, the responsibility for the production of hereditary defectives upon the nation, the state, the community and the family which produce them. The Howe Laboratory of Ophthalmology The family of Dr. Lucien Howe, of Buffalo, has given $250,000 to Harvard University for the foundation of a memorial institution to be known as the Howe Laboratory of Ophthalmology. The plan for the whole laboratory contemplates an expenditure of half a million dollars. Dr. Howe's gift will be supplemented by $175,000 from the general education board. The laboratory will be devoted to both instruction and research. For thirty years Dr. Howe has been professor of ophthalmology in the University of Buffalo, and he has been active in the work of the American Association of Ophthalmology. Dr. Howe himself will be the first director of the laboratory. He will take pains to introduce a policy which will make the laboratory a center for research by both resident and occasional investigators in special problems connected with human vision. The laboratory is established particularly as a memorial to the members of Dr. and Mrs. Howe's families who were active in high command of the armies of the Civil War. Eugenicists are particularly interested in this new institution because Dr. Howe has devoted many years of his life to the study of hereditary eye defects, and has developed plans for the application of sound principles in applied eugenics for the prevention of hereditary blindness. Anthropological Iconography From Lehmann's Verlag in Munchen is now appearing a series of race-portraits on cards 20 X 13 cm., about 10 cards to a package. On each card are printed halftones (usually three of the various aspects) of heads, and some descriptive text. In this text is a running account of the race under consideration, a description of its location, some measurements and descriptions of color, and a brief bibliography. Thus the first package contains portraits of Tamils of Madras presidency, India. They are characterized by dark brown skin, wavy hair, often thickish lips, a Roman nose and rounded face in the women. The second package contains 10 cards of Baskirs of the Orenburg government in the southern slopes of the Urals. The features are varied. Some have the epicanthus, others lack it. In general, they are rather short-legged and stocky, as appears from the full length portraits on the last two charts. The plan of this portrait gallery seems to us a good one. If any criticism were to be given, one might ask for larger head portraits, even at the cost of the text, and a full length portrait to show bodily proportions and hair coat. Archiv for Rassenbilder, I and II. Munchen: J.P. Lehmanns Verlag. Each set 2 Gm. Physical Anthropology in Germany The first meeting of the Gesellschaft for Physische Anthropologie took place the 13th and 14th of April in Freiburg i. Br. Members were welcomed on the evening of the 13th of April in the Cafť Kopf. The scientific session took place at the same place on the following day. In the afternoon a business session was held. The officers of the preliminary organization were chosen for two years: President, Prof. E. Fischer, of Freiburg; vice president, Prof O. Aichel, of Kiel; secretary, Privatdozent W. Gieseler, of Munchen. The society voted to publish the papers separately under the title of "Verhandlungen der Gesellschaft fur Physische Anthropologie."
Copyright 1999-2004: Cold Spring Harbor Laboratory; American Philosophical Society; Truman State University; Rockefeller Archive Center/Rockefeller University; University of Albany, State University of New York; National Park Service, Statue of Liberty National Monument; University College, London; International Center of Photography; Archiv zur Geschichte der Max-Planck-Gesellschaft, Berlin-Dahlem; and Special Collections, University of Tennessee, Knoxville.
The images and text in this Archive are solely for educational and scholarly uses. The materials may be used in digital or print form in reports, research, and other projects that are not offered for sale. Materials in this archive may not be used in digital or print form by organizations or commercial concerns, except with express permission.