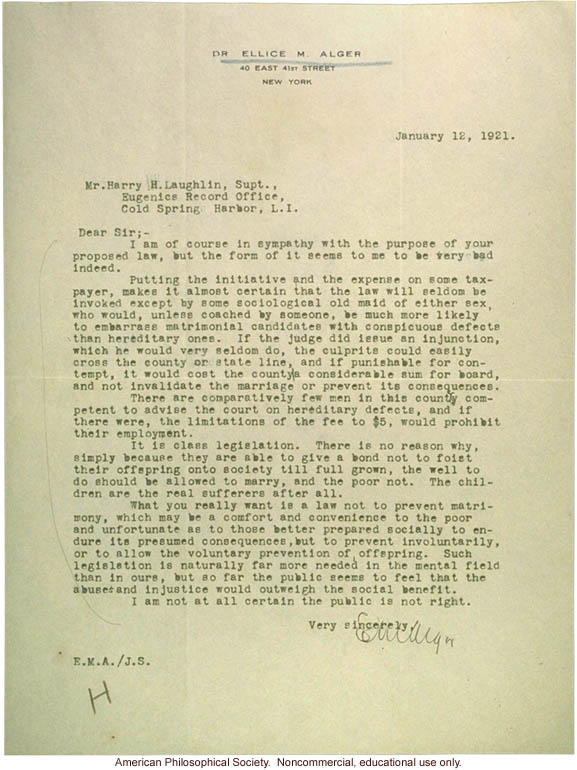 Dr. Ellice M. Alger 40 East 41st Street New York January 12, 1921. Mr. Harry H. Laughlin, Supt., Eugenics Record Office, Cold Spring Harbor, L.I. Dear Sir;- I am of course in sympathy with the purpose of your proposed law, but the form of it seems to me to be very bad indeed. Putting the initiative and the expense on some taxpayer, makes it almost certain that the law will seldom be invoked except by some sociological old maid of either sex, who would, unless coached by someone, be much more likely to embarrass matrimonial candidates with conspicuous defects than hereditary ones. If the judge did issue an injunction, which he would very seldom do, the culprits could easily cross the county or state line, and if punishable for contempt, it would cost the county a considerable sum for board, and not invalidate the marriage or prevent its consequences. There are comparatively few men in this county competent to advise the court on hereditary defects, and if there were, the limitations of the fee to $5, would prohibit their employment. It is class legislation. There is no reason why, simply because they are able to give a bond not to foist their offspring onto society till full grown, the well to do should be allowed to marry, and the poor not. The children are the real sufferers after all. What you really want is a law not to prevent matrimony, which may be a comfort and a convenience to the poor and unfortunate as to those better prepared socially to endure its presumed consequences, but to prevent involuntarily, or to allow the voluntary prevention of, offspring. Such legislation is naturally far more needed in the mental field than in ours, but so far the public seems to feel that the abuses and injustice would outweigh the social benefit. I am not at all certain the public is not right. Very sincerely, (signed) E.M.A./J.S.
Copyright 1999-2004: Cold Spring Harbor Laboratory; American Philosophical Society; Truman State University; Rockefeller Archive Center/Rockefeller University; University of Albany, State University of New York; National Park Service, Statue of Liberty National Monument; University College, London; International Center of Photography; Archiv zur Geschichte der Max-Planck-Gesellschaft, Berlin-Dahlem; and Special Collections, University of Tennessee, Knoxville.
The images and text in this Archive are solely for educational and scholarly uses. The materials may be used in digital or print form in reports, research, and other projects that are not offered for sale. Materials in this archive may not be used in digital or print form by organizations or commercial concerns, except with express permission.