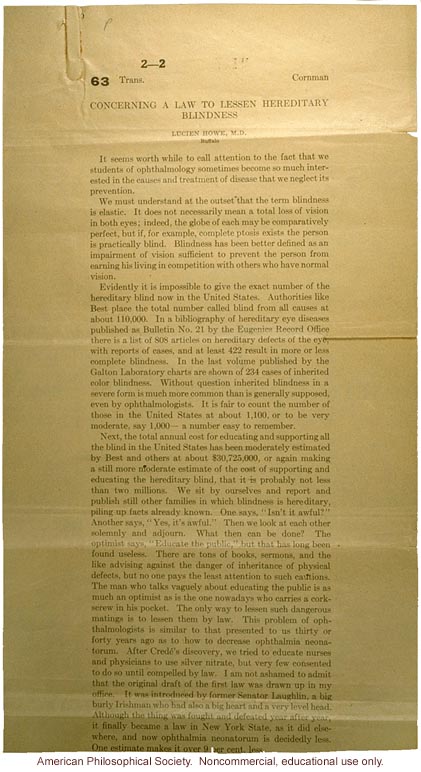 2-2 63 Trans. Cornman Concerning a Law to Lessen Hereditary Blindness Lucien Howe, M.D. [illegible] It seems worthwhile to call attention to the fact that we students of ophthalmology sometimes become so much interested in the causes and treatment of diseases that we neglect its prevention. We must understand at the outset that the term blindness is elastic. It does not necessarily mean a total loss of vision in both eyes; indeed the globe of each may be comparatively perfect, but if, for example, complete ptosis exists the person is genetically blind. Blindness has been better defined as an impairment of vision sufficient to prevent the person from earning his living in competition with others who have normal vision. Evidently it is impossible to give the exact number of hereditary blind now in the United States. Authorities like Best place the total number called blind from all causes at about 110,000. In a bibliography of hereditary eye diseases published as Bulletin No. 21 by the Eugenics Record Office there is a list of 808 articles on hereditary defects of the eye, with reports of cases, and at least 422 result in more or less complete blindness. In the last volume published by the Galton Laboratory charts are shown of 234 cases of inherited color blindness. Without question inherited blindness in a severe form is much more common that is generally supposed, even by ophthalmologists. It is fair to count the number of those in the United States at about 1,100, or to be very moderate, say 1,000 - a number easy to remember. Next, the total annual cost for educating and supporting all the blind in the United States has been moderately estimated by Best and other at about $30, 725,000, or again making a still more moderate estimate of the cost of supporting and educating the hereditary blind, that it is probably not less than two millions. We sit by ourselves and report and publish still other families in which blindness is hereditary, piling up facts already known. One says, "Isn't it awful?" Another says, "Yes, it's awful." Then we look at each other solemnly and adjourn. What then can be done? The optimist says, "Educate the public," but that has long been found useless. There are tons of books, sermons, and the like advising against the danger of inheritance of physical defects, but no one pays the least attention to these cautions. The man who talks vaguely about educating the public is as much an optimist as is the one nowadays who carries a corkscrew in his pocket. The only way to lessen such dangerous matings is to lessen them by law. The problem of ophthalmologists is similar to that presented to us thirty or forty years ago as to how to decrease ophthalmia neonatorum. After Credd's discovery, we tried to educate nurses and physicians to use silver nitrate, but very few consented to do so until compelled by law. I am not ashamed to admit that the original draft of the first law was drawn up in my office. It was introduced by former Senator Laughlin, a big burly Irishman who had also a big heart and a level head. Although the thing was fought and defeated year after year, it finally became a law in New York State, as it did elsewhere, and now ophthalmia neonatorum is decidedly less. One estimate makes it over 9 per cent less.
Copyright 1999-2004: Cold Spring Harbor Laboratory; American Philosophical Society; Truman State University; Rockefeller Archive Center/Rockefeller University; University of Albany, State University of New York; National Park Service, Statue of Liberty National Monument; University College, London; International Center of Photography; Archiv zur Geschichte der Max-Planck-Gesellschaft, Berlin-Dahlem; and Special Collections, University of Tennessee, Knoxville.
The images and text in this Archive are solely for educational and scholarly uses. The materials may be used in digital or print form in reports, research, and other projects that are not offered for sale. Materials in this archive may not be used in digital or print form by organizations or commercial concerns, except with express permission.