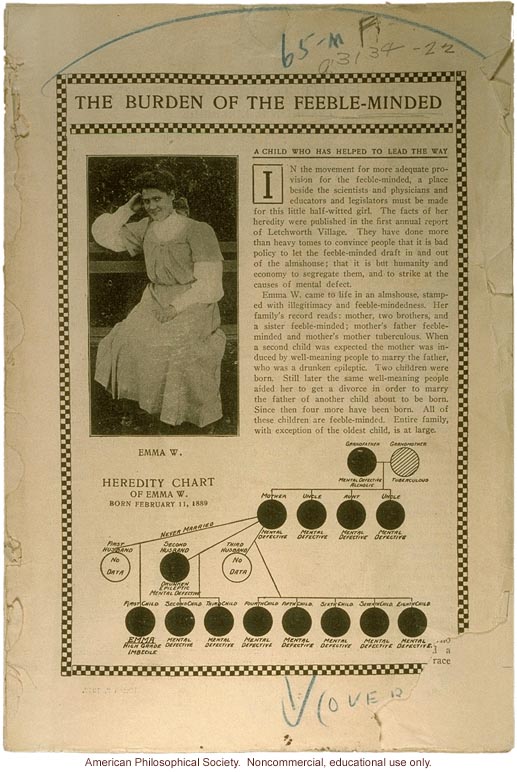 The Burden of the Feeble-Minded A Child Who Helped to Lead the Way In the movement for more adequate provision for the feeble-minded, a place beside the scientists and physicians and educators and legislators must be made for this little half-witted girl. The facts of her heredity were published in the first annual report of Letchworth Village. They have done more than heavy tomes to convince people that it is bad policy to let the feeble-minded draft in and out of the almshouse; that it is but humanity and economy to interrogate them, and to strike at the causes of mental defect. Emma W. came to life in an almshouse, stamped with illegitimacy and feeble-mindedness. Her family's record reads: mother, two brothers, and a sister feeble-minded; mother's father feeble-minded and mother's mother tuberculosis. When a second child was expected the mother was induced by well-meaning people to marry the father, who was a drunken epileptic. Two children were born. Still later the same well-meaning people aided her to get a divorce to marry the father of another child about to be born. Since then four more have been born. All of these children are feeble-minded. Entire family, with exception of the oldest child, is at large. Heredity Chart Of Emma W. Born February 11, 1889 [photo] [diagram]
Copyright 1999-2004: Cold Spring Harbor Laboratory; American Philosophical Society; Truman State University; Rockefeller Archive Center/Rockefeller University; University of Albany, State University of New York; National Park Service, Statue of Liberty National Monument; University College, London; International Center of Photography; Archiv zur Geschichte der Max-Planck-Gesellschaft, Berlin-Dahlem; and Special Collections, University of Tennessee, Knoxville.
The images and text in this Archive are solely for educational and scholarly uses. The materials may be used in digital or print form in reports, research, and other projects that are not offered for sale. Materials in this archive may not be used in digital or print form by organizations or commercial concerns, except with express permission.