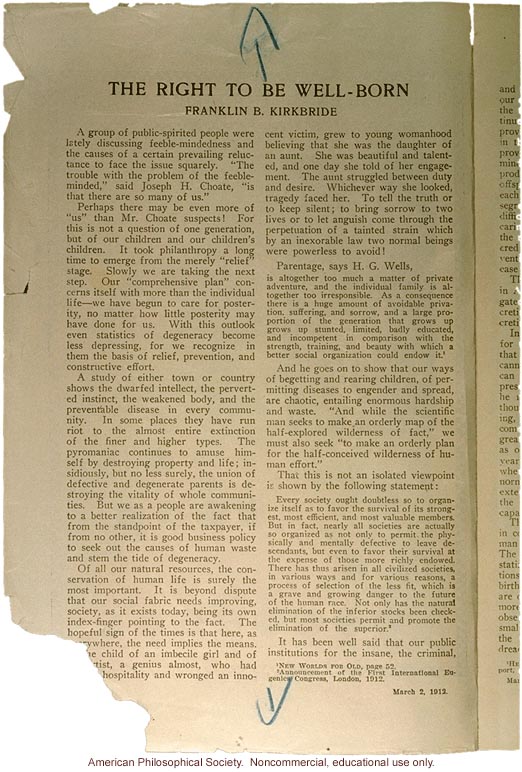 The Right to be Well-Born Franklin B. Kirkbride A group of public-spirited people were lately discussing feeble-mindedness and the causes of a certain prevailing reluctance to face the issue squarely. "The trouble with the problem of the feeble-minded," said Joseph H. Choate, "is that there are so many of us." Perhaps there may be even more of "us" than Mr. Choate suspects! For this is not a question of one generation, but of our children and our children's children. It took philanthropy a ling time to emerge from the merely "relief" stage. Slowly we are taking the next step. Our "comprehensive plan" concerns itself with more than the individual life - we have begun to care for posterity, no matter how little posterity may have done for us. With this outlook even statistics of degeneracy become less depressing, for we recognize in them the basis of relief, prevention, and constructive effort. A study of either town or country shows the dwarfed intellect, the perverted instinct, the weakened body, and the preventible[sic] disease in every community. In some places they have run riot to the almost entire extinction of the finer and higher types. The pyromaniac continues to amuse himself by destroying property and life; insidiously, but no less surely, the union of defective and degenerate parents is destroying the vitality of whole communities. But we as a people are awakening to a better realization of the fact that from the standpoint of the taxpayer, if from no other, it is good business policy to seek out the causes of human waste and stem the tide of degeneracy. Of all our natural resources, the conservation of human life is surely the most important. It is beyond dispute that our social fabric needs improving, society, as it exists today, being its own index-finger pointing to the fact. The hopeful sign of the times is that here, as everywhere[word deduced from torn mss], the need implies the means. The child of an imbecile girl and of [obscured], a genius almost, who had [obscured] hospitality and wronged an innocent victim, grew to young womanhood believing that she was the daughter of an aunt. She was beautiful and talented, and one day told of her engagement. The aunt struggled between duty and desire. Whichever way she looked, tragedy faced her. To tell the truth or to keep silent; to bring sorrow to two lives or to let anguish come through the perpetuation of a tainted strain which by an inexorable law two normal beings were powerless to avoid! Parentage, says H.G. Wells, is altogether too much a matter of private adventure, and the individual family is altogether too irresponsible. As a consequence there is a huge amount of avoidable privation, suffering, and sorrow, and a large proportion of the generation that grows up grows up stunted, limited, badly educated, and incompetent in comparison with strength, training, and beauty with which a better social organization could endow it.[sup]1[end superior] And he goes on to show our ways of begetting and rearing children, of permitting diseases to engender and spread, are chaotic, entailing enormous hardship and waste. "And while the scientific man seeks to make an orderly map of the half-explored wilderness of fact," we must also seek "to make an orderly plan for the half-conceived wilderness of human effort." That this is not an isolated viewpoint is shown by the following statement: Every society ought doubtless so to organize itself as to favor the survival of its strongest, most efficient, and most valuable members. But in fact, nearly all societies are actually so organized as not only to permit the physically and mentally defective to leave descendants, but even to favor their survival at the expense of those more richly endowed. There has thus arisen in all civilized societies, in various ways and for various reasons, a process of selection of the less fit, which is a grave and growing danger to the future of the human race. Not only has the natural elimination of the inferior stocks been checked, but most societies permit and promote the elimination of the superior.[sup]2[end superior] It has been well said that our public institutions for the insane, the criminal, [sup]1[end superior] New Worlds for Old, page 52. [sup]2[end superior] Announcement of the First International Eugenic Congress, London, 1912. March 2, 1912.
Copyright 1999-2004: Cold Spring Harbor Laboratory; American Philosophical Society; Truman State University; Rockefeller Archive Center/Rockefeller University; University of Albany, State University of New York; National Park Service, Statue of Liberty National Monument; University College, London; International Center of Photography; Archiv zur Geschichte der Max-Planck-Gesellschaft, Berlin-Dahlem; and Special Collections, University of Tennessee, Knoxville.
The images and text in this Archive are solely for educational and scholarly uses. The materials may be used in digital or print form in reports, research, and other projects that are not offered for sale. Materials in this archive may not be used in digital or print form by organizations or commercial concerns, except with express permission.