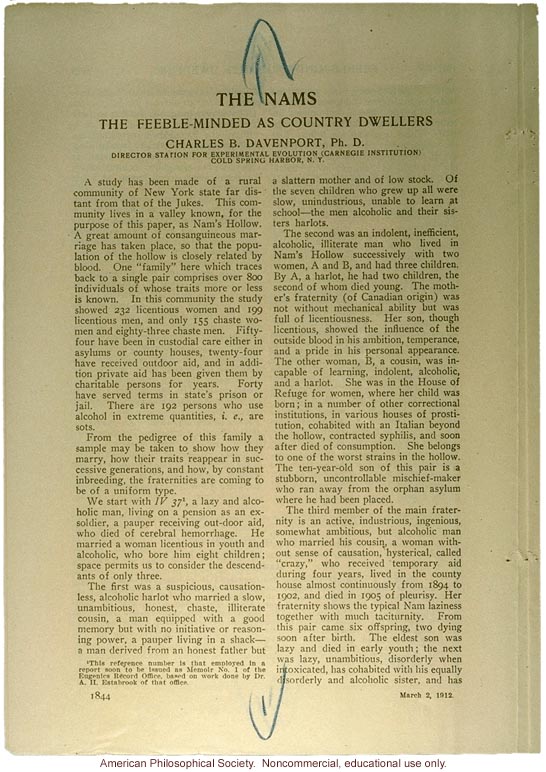 The Nams The Feeble-Minded as Country Dwellers Charles B. Davenport, Ph.D. Director Station for Experimental Evolution (Carnegie Institution) Cold Spring Harbor, N. Y. A study as been made of a rural community of New York state far distant from that of the Jukes. This community lives in a valley known, for the purpose of this paper, as Nam's Hollow. A great amount of consanguineous marriage has taken place, so that the population of the hollow is closely related by blood. Our "family" here which traces back to a single pair comprises over 800 individuals of whose traits more or less is known. In this community the study showed 232 licentious women and 199 licentious men, and only 155 chaste women and eighty-five chaste men. Fifty-four have been in custodial care either in asylums or country houses, twenty-four have received outdoor aid, and in addition private aid has been given them by charitable persons for years. Forty have served terms in state's prison or jail. There are 192 persons who use alcohol in extreme quantities, i.e., are sots. From the pedigree of this family a sample may be taken to show how they marry, how their traits reappear in successive generations, and how, by constant inbreeding, the fraternities are coming to be of a uniform type. We start with IV 37[superior]1[end superior], a lazy and alcoholic man, living on a pension as an ex-soldier, a pauper receiving outdoor aid, who died of a cerebral hemorrhage. He married a woman licentious in youth and alcoholic, who bore him eight children; space permits us to consider the descendants of only three. The first was a suspicious, causationless, alcoholic harlot who married a slow, unambitious, honest, chaste, illiterate cousin, a man equipped with a good memory but with no initiative or reasoning power, a pauper living in a shack - a man derived from an honest father but a slattern mother and of low stock. Of the seven children who grew up all were slow, unindustrious, unable to learn at school - the men alcoholic and their sisters harlots. The second was an indolent, inefficient, alcoholic, illiterate man who lived in Nam's Hollow successively with two women, A and B, and had three children. By A, a harlot, he had two children, the second of whom died young. The mother's fraternity (of Canadian origin) was not without mechanical ability but was full of licentiousness. Her son, though licentious, showed the influence of the outside blood in his ambition, temperance, and a pride in his personal appearance. The other woman, B, a cousin, was incapable of learning, indolent, alcoholic, and a harlot. She was in the House of Refuge for women, where her child was born; in a number of other correctional institutions, in various houses of prostitution, cohabited with an Italian beyond the hollow, contracted syphilis, and soon after died of consumption. She belongs to one of the worst strains in the hollow. The ten-year-old son of this pair is a stubborn, uncontrollable mischief-maker who ran away from the orphan asylum where he had been placed. The third member of the main fraternity is an active, industrious, ingenious, somewhat ambitious, but alcoholic man who married his cousin, a woman without sense of causation, hysterical, called "crazy," who received temporary aid during four years, lived in the country house almost continuously from 1894 to 1902, and died in 1905 of pleurisy. Her fraternity shows the typical Nam haziness together with much taciturnity. From this pair came six offspring, two dying soon after birth. The eldest son was lazy and died in early youth; the next was lazy, unambitious, disorderly when intoxicated, has cohabited with his equally disorderly and alcoholic sister, and has [superior]1[end superior] This reference number is that employed in a report soon to be issued as Memoir No. 1 of the Eugenics Record Office, based on work done by Dr. A. H. Estabrook of that office. 1844 March 2, 1912.
Copyright 1999-2004: Cold Spring Harbor Laboratory; American Philosophical Society; Truman State University; Rockefeller Archive Center/Rockefeller University; University of Albany, State University of New York; National Park Service, Statue of Liberty National Monument; University College, London; International Center of Photography; Archiv zur Geschichte der Max-Planck-Gesellschaft, Berlin-Dahlem; and Special Collections, University of Tennessee, Knoxville.
The images and text in this Archive are solely for educational and scholarly uses. The materials may be used in digital or print form in reports, research, and other projects that are not offered for sale. Materials in this archive may not be used in digital or print form by organizations or commercial concerns, except with express permission.