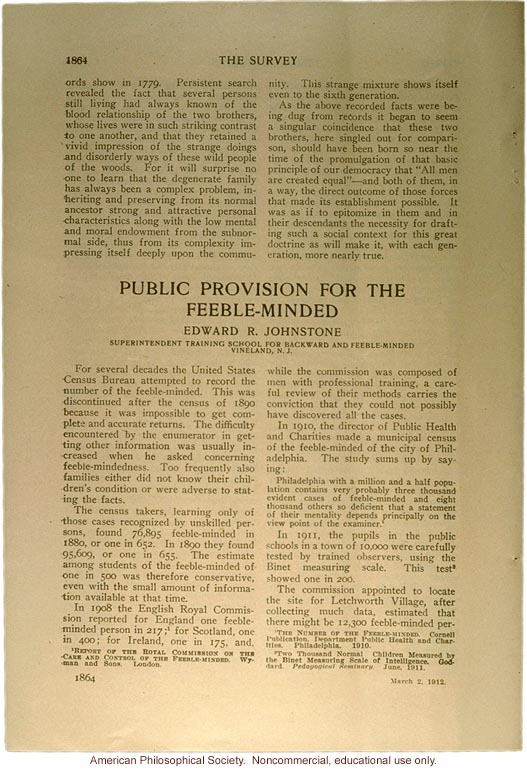 1864 The Survey ords show in 1779. Persistent search revealed the fact that several persons still living had always known of the blood relationship of the two brothers, whose lives were in such striking contrast to one another, and that they retained a vivid impression of the strange doings and disorderly ways of these wild people of the woods. For it will surprise no one to learn that the degenerate family has always been a complex problem, inheriting and preserving from its normal ancestor strong and attractive personal characteristics along with the low mental and moral endowment from the subnormal side, thus from its complexity impressing itself deeply upon the community. This strange mixture shows itself even to the sixth generation. As the above recorded facts were being dug from records it began to seem a singular coincidence that these two brothers, here singled out for comparison, should have been born so near the time of the promulgation of that basic principle of our democracy that "All men are created equal" - and both of them, in a way, the direct outcome of those forces that made its establishment possible. It was as if to epitomize in them and in their descendants the necessity for drafting such a social context for this great doctrine as will make it, with each generation, more nearly true. Public Provision for the Feeble-Minded Edward R. Johnstone Superintendent Training School for Backward and Feeble-Minded Vineland, N. J. For several decades the United States Census Bureau attempted to record the number of the feeble-minded. This was discontinued after the census of 1890 because it was impossible to get complete and accurate returns. The difficulty encountered by the enumerator in getting other information was usually increased when he asked concerning feeble-mindedness. Too frequently also families either did not know their children's condition or were adverse to stating the facts. The census takers, learning only of those cases recognized by unskilled persons, found 76,895 feeble-minded in 1880, or one in 652. In 1890 they found 95,609, or one in 655. The estimate among students of the feeble-minded of one in 500 was therefore conservative, even with the small amount of information available at that time. In 1908 the English Royal Commission reported for England one feeble-minded person in 217[superior]1[end superior]; for Scotland, one in 400; for Ireland, one in 175, and, while the commission was composed of men with professional training, a careful review of their methods carries the conviction that they could not possibly have discovered all the cases. In 1910, the director of Public Health and Charities made a municipal census of the feeble-minded of the city of Philadelphia. The study sums up by saying: Philadelphia with a million and a half population contains very probably three thousand evident cases of feeble-minded and eight thousand others so deficient that a statement of their mentality depends principally on the view point of the examiner[superior]2[end superior]. In 1911, the pupils in the public schools in a town of 10,000 were carefully tested by trained observers, using the Binet measuring scale. This test[superior]3[end superior] showed one in 200. The commission appointed to locate the site for Letchworth Village, after collecting much data, estimated that there might be 12,300 feeble-minded per- [superior]1[end superior] Report of the Royal Commission on the care and control of the feeble-minded. Wyman and Sons. London. [superior]2[end superior] The Number of the Feeble-minded. Cornell Publication, Department of Public Health and Charities. Philadelphia. 1910. [superior]3[end superior] Two Thousand Normal Children Measured by the Binet Measuring Scale of Intelligence. Goddard. Pedagogical Seminary. June 1911. 1864 March 2, 1912.
Copyright 1999-2004: Cold Spring Harbor Laboratory; American Philosophical Society; Truman State University; Rockefeller Archive Center/Rockefeller University; University of Albany, State University of New York; National Park Service, Statue of Liberty National Monument; University College, London; International Center of Photography; Archiv zur Geschichte der Max-Planck-Gesellschaft, Berlin-Dahlem; and Special Collections, University of Tennessee, Knoxville.
The images and text in this Archive are solely for educational and scholarly uses. The materials may be used in digital or print form in reports, research, and other projects that are not offered for sale. Materials in this archive may not be used in digital or print form by organizations or commercial concerns, except with express permission.