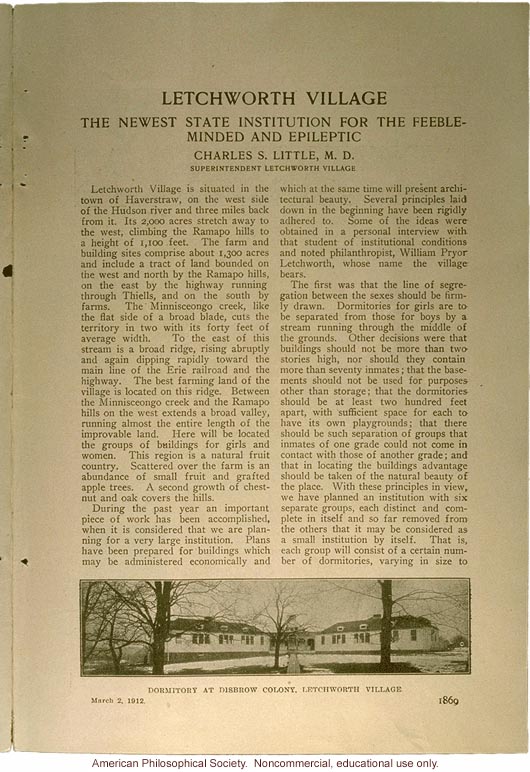 Letchworth Village The Newest State Institution for the Feeble-Minded and Epileptic Charles S. Little, M. D. Superintendent Letchworth Village Letchworth Village is situated in the town of Haverstraw, on the west side of the Hudson river and three miles back from it. Its 2,000 acres stretch away to the west, climbing the Ramapo hills to a height of 1,100 feet. The farm and building sites comprise about 1,300 acres and include a tract of land bounded on the west and north by the Ramapo hills, on the east by the highway running through Thiells, and on the south by farms. The Minnisceongo creek, like the flat side of a broad blade, cuts the territory in two with its forty feet of average width. To the east of this stream is a broad ridge, rising abruptly and again dipping rapidly toward the main line of the Erie railroad and the highway. The best farming land of the village is located on this ridge. Between the Minnisceongo creek and the Ramapo hills on the west extends a broad valley, running almost the entire length of the improvable land. Here will be located the groups of buildings for girls and women. This region is a natural fruit country. Scattered over the farm is an abundance of small fruit and grafted apple trees. A second growth of chestnut and oak covers the hills. During the past year an important piece of work has been accomplished, when it is considered that we are planning for a very large institution. Plans have been prepared for buildings which may be administered economically and which at the same time will present architectural beauty. Several principles laid down in the beginning have been rigidly adhered to. Some of the ideas were obtained in a personal interview with the student of institutional conditions and noted philanthropist, William Pryor Letchworth, whose name the village bears. The first was that the line of aggregation between the sexes should be firmly drawn. Dormitories for girls are to be separated from those for the boys by a stream running through the middle of the grounds. Other decisions were that buildings should not be more than two stories high, nor should they contain more than seventy inmates; that the basements should not be used for purposes other than storage; that the dormitories should be at least two hundred feet apart, with sufficient space for each to have its own playgrounds; that there should be such separation of groups that inmates of one grade could not come in contact with those of another grade; and that in locating the buildings advantage should be taken of the natural beauty of the place. With those principles in view, we have planned an institution with six separate groups, each distinct and complete in itself and so far removed from the others that it may be considered as a small institution by itself. That is, each group will consist of a certain number of dormitories, varying in size to [caption] Dormitory at Disbrow colony, Letchworth village March 2, 1912. 1869
Copyright 1999-2004: Cold Spring Harbor Laboratory; American Philosophical Society; Truman State University; Rockefeller Archive Center/Rockefeller University; University of Albany, State University of New York; National Park Service, Statue of Liberty National Monument; University College, London; International Center of Photography; Archiv zur Geschichte der Max-Planck-Gesellschaft, Berlin-Dahlem; and Special Collections, University of Tennessee, Knoxville.
The images and text in this Archive are solely for educational and scholarly uses. The materials may be used in digital or print form in reports, research, and other projects that are not offered for sale. Materials in this archive may not be used in digital or print form by organizations or commercial concerns, except with express permission.