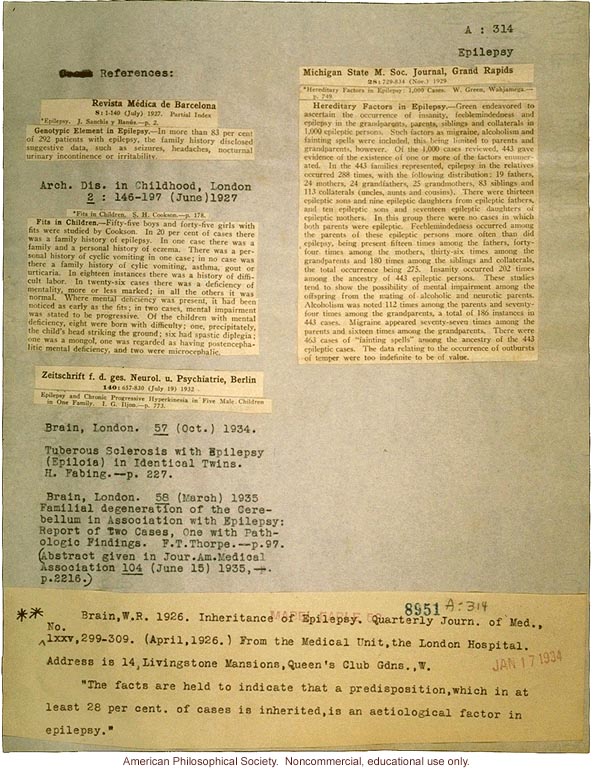 [obscured] References: Revista Medica de Barcelona 8:1-140 (July) 1927. Partial Index *Epilepsy. J. Sanchis y Banus. - p. 2. Genotypic Element in Epilepsy. - In more than 83 per cent of 292 patients with epilepsy, the family history disclosed suggestive data, such as seizures, headaches, nocturnal urinary incontinence or irritability. Arch. Dis. in Childhood, London 2: 146-197 (June) 1927 Fits in Children, S. H. Cookson. - p. 178. Fits in Children. - Fifty-five boys and forty-five girls with fits were studied by Cookson. In 20 per cent of cases there was a family history of epilepsy. Inone case there was a family and a personal history of eczema. There was a personal history of cyclic vomiting in one case; in no case was there a family history of cylic[sic] vomiting, asthma, gout, or urticaria. In eighteen instances there was a history of difficult labor. In twenty-six cases there was a deficiency of mentality, more or less marked; in all the others it was normal. Where mental deficiency was present, it had been noticed as early as the fits; in two cases, mental impairment was stated to be progressive. Of the children with mental deficiency, eight were born with difficulty; one, precipitately, the child's head striking the ground; six had spastic diplegia; one was a Mongol, one was regarded as having postencephalitic mental deficiency, and two were microcephalic. Zeitschrift f. d. ges. Neurol. U. Psychiatrie, Berlin 140: 657-830 (July 19) 1932 Epilepsy and Chronic Progressive Hyperkinesia in Five Male Children in One Family. I. G. Iljon. -p. 773. Brain, London. 57 (Oct.) 1934. Tuberous Sclerosis with Epilepsy (Epiloia) in Identical Twins. H. Fabing. -p. 227. Brain, London. 58 (March) 1935 Familial degeneration of the Cerebellum in Association with Epilepsy: Report of Two Cases, One with Pathologic Findings. F. T. Thorpe. - p.97. (Abstract given in Jour.Am.Medical Association 104 (June 15) 1935, -. P.2216.) **Brain, W. R. 1926. Inheritace of Epilepsy. Quarterly Journ. Of Med., No. 1xxv, 299-309. (April, 1926.) From the Medical Unit, the London Hospital. Address is 14, Livingstone Mansions, Queen's Club Gdns., W. "The Facts are held to indicate that a predisposition, which in at least 28 per cent. of cases is inherited, is an aetiological factor in epilepsy." A:314 Epilepsy Michigan State M. Soc. Journal, Grand Rapids 28: 729-834 (Nov.) 1929 *Hereditary Factors in Epilepsy: 1,000 Cases. W. Green, Wahjamega.-p. 749. Hereditary Factors in Epilepsy. - Green endeavored to ascertain the occurrence of insanity, feeblemindedness and epilepsy in the grandparents, parents, siblings and collaterals in 1,000 persons. Such factors as migraine, alcoholism and fainting spells were included, this being limited to parents and grandparents, however. Of the 1,000 cases reviewed, 443 gave evidence of the existence of one or more of the factors enumerated. In the 443 families represented, epilepsy in the relatives occurred 288 times, with the following distribution: 19 fathers, 24 mothers, 24 grandfathers, 25 grandmothers, 83 siblings and 113 collaterals (uncles, aunts, cousins). There were thirteen epileptic sons and nine epileptic daughters from epileptic , and ten epileptic sons and seventeen epileptic daughters of epileptic mothers. In this group there were no cases in which both parents were epileptic. Feeblemindedness occurred among the parents of these epileptic persons more often than did epilepsy, being present fifteen times among the fathers, forty-four times among the mothers, thirty-six times among the grandparents and 180 times among the siblings and collaterals, the total occurrence being 275. Insanity occurred 202 times among the ancestry of 443 epileptic persons. These studies tend to show the possibility of mental impairment among the offspring from the mating of alcoholic and neurotic parents. Alcoholism was noted 112 times among the parents and seventy-four times among the grandparents, a total of 186 instances in 443 cases. Migraine appeared seventy-seven times among the parents and sixteen times among the grandparents. There were 463 cases of "fainting spells" among the ancestry of the 443 epileptic cases. The data relating to the occurrence of outbursts of temper were too indefinite to be of value.
Copyright 1999-2004: Cold Spring Harbor Laboratory; American Philosophical Society; Truman State University; Rockefeller Archive Center/Rockefeller University; University of Albany, State University of New York; National Park Service, Statue of Liberty National Monument; University College, London; International Center of Photography; Archiv zur Geschichte der Max-Planck-Gesellschaft, Berlin-Dahlem; and Special Collections, University of Tennessee, Knoxville.
The images and text in this Archive are solely for educational and scholarly uses. The materials may be used in digital or print form in reports, research, and other projects that are not offered for sale. Materials in this archive may not be used in digital or print form by organizations or commercial concerns, except with express permission.