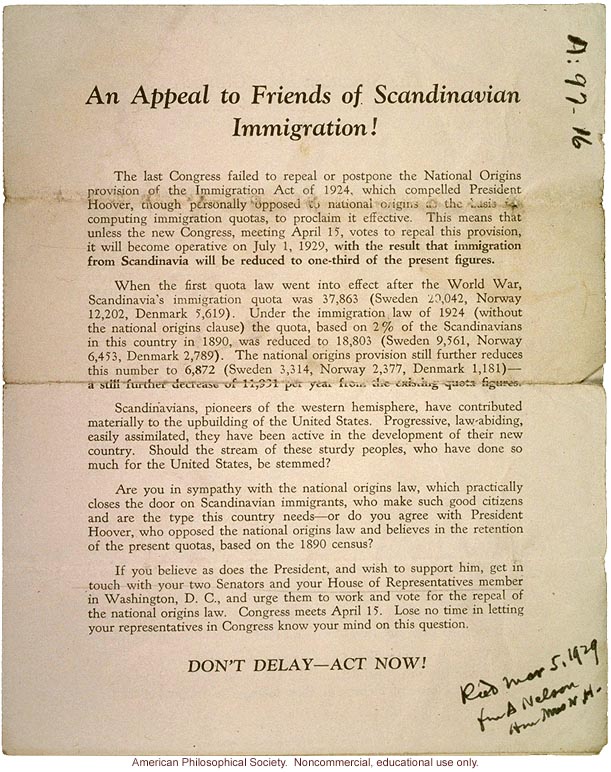 An Appeal to Friends of Scandinavian Immigration! The last Congress failed to repeal or postpone the National Origins provision of the Immigration Act of 1924, which compelled President Hoover, though personally opposed to national origins as the basis of computing immigration quotas, to proclaim it effective. This means that unless the new Congress, meeting April 15, votes to repeal this provision, it will become operative on July 1, 1929, with the result that immigration from Scandinavia will be reduced to one-third of the present figures. When the first quota law went into effect after the World War, Scandinavia's immigration quota was 37,863 (Sweden 20,042, Norway 12,202, Denmark 5,619). Under the immigration law of 1924 (without the national origins clause) the quota, based on 2% of the Scandinavians in this country in 1890, was reduced to 18,803 (Sweden, 9,561, Norway 6,453, Denmark 2,789). The national origins provision still further reduces this number to 6,872 (Sweden 3,314, Norway 2,377, Denmark 1,181) --- a still further decrease of 11,931 per year from the existing quota figures. Scandinavians, pioneers of the western hemisphere, have contributed materially to the upbuilding of the United States. Progressive, law-abiding, easily assimilated, they have been active in the development of their new country. Should the stream of these sturdy peoples, who have done so much for the United States, be stemmed? Are you in sympathy with the national origins law, which practically closes the door on Scandinavian immigrants, who make such good citizens and are the type this country needs - or do you agree with President Hoover, who opposed the national origins law and believes in the retention of the present quotas, based on the 1890 census? If you believe as does the President, and wish to support him, get in touch with your two senators and your House of Representatives member in Washington, D.C., and urge them to work and vote for the repeal of the national origins law. Congress meets April 15. Lose no time in letting your representatives in Congress know your mind on this question. Don't Delay - Act Now! [illegible handwriting, lower margin]
Copyright 1999-2004: Cold Spring Harbor Laboratory; American Philosophical Society; Truman State University; Rockefeller Archive Center/Rockefeller University; University of Albany, State University of New York; National Park Service, Statue of Liberty National Monument; University College, London; International Center of Photography; Archiv zur Geschichte der Max-Planck-Gesellschaft, Berlin-Dahlem; and Special Collections, University of Tennessee, Knoxville.
The images and text in this Archive are solely for educational and scholarly uses. The materials may be used in digital or print form in reports, research, and other projects that are not offered for sale. Materials in this archive may not be used in digital or print form by organizations or commercial concerns, except with express permission.