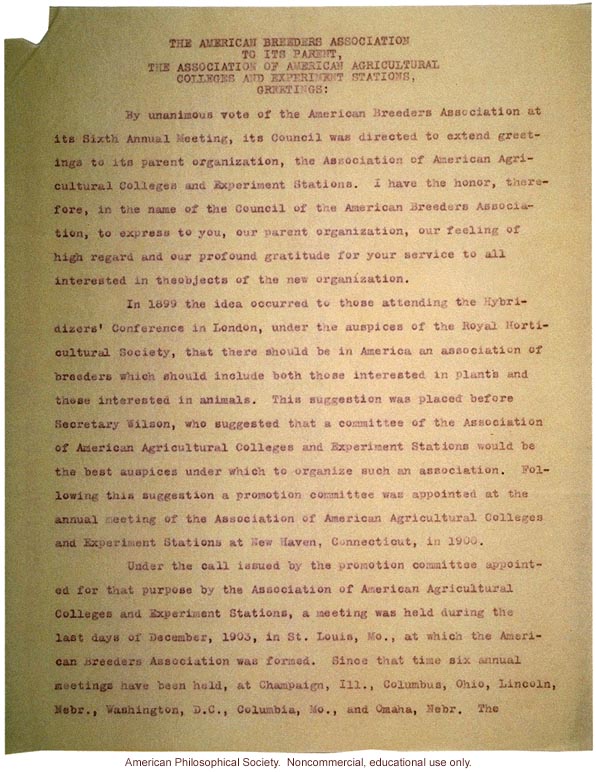 THE AMERICAN BREEDERS ASSOCIATION TO ITS PARENT THE ASSOCIATION OF AMERICAN AGRICULTURE COLLEGES AND EXPERIMENT STATION, GREETINGS: By unanimous vote of the American Breeders Association at its Sixth Annual Meeting, its council was directed to extend greetings to its parent organization, the Association of American Agricultural Colleges and Experiment Stations. I have the honor, therefore, in the name of the council of the American Breeders Association, to express to you, our parent organization, our feeling of high regard and our profound gratitude for your service to all interested in the objects of the new organization. In 1899 the idea occurred to those attending the Hybridizers’ Conference in London, under the auspices of the Royal Horticultural Society, that there should be in America an association of breeders, which should include both those, interested in plants and those interested in animals. This suggestion was placed before Secretary Wilson, who suggested that a committee of the Association of American Agricultural Colleges and Experiment Stations would be the best auspices under which to organize such an association. Following this suggestion a promotion committee was appointed at the annual meeting of the Association of American Agricultural Colleges and Experiment Stations at New Haven, Connecticut, in 1900. Under the call issued by the promotion committee appointed for that purpose by the Association of American Agricultural Colleges and Experiment Station, a meeting was held during the last days of December 1903, in St. Louis, MO., at which the American Breeders Association was formed. Since that time six annual meetings have been held, at Champaign, Ill. Columbus, Ohio, Lincoln, Nebr, Washington, D.C., Columbia, Mo., and Omaha, Nebr. The
Copyright 1999-2004: Cold Spring Harbor Laboratory; American Philosophical Society; Truman State University; Rockefeller Archive Center/Rockefeller University; University of Albany, State University of New York; National Park Service, Statue of Liberty National Monument; University College, London; International Center of Photography; Archiv zur Geschichte der Max-Planck-Gesellschaft, Berlin-Dahlem; and Special Collections, University of Tennessee, Knoxville.
The images and text in this Archive are solely for educational and scholarly uses. The materials may be used in digital or print form in reports, research, and other projects that are not offered for sale. Materials in this archive may not be used in digital or print form by organizations or commercial concerns, except with express permission.