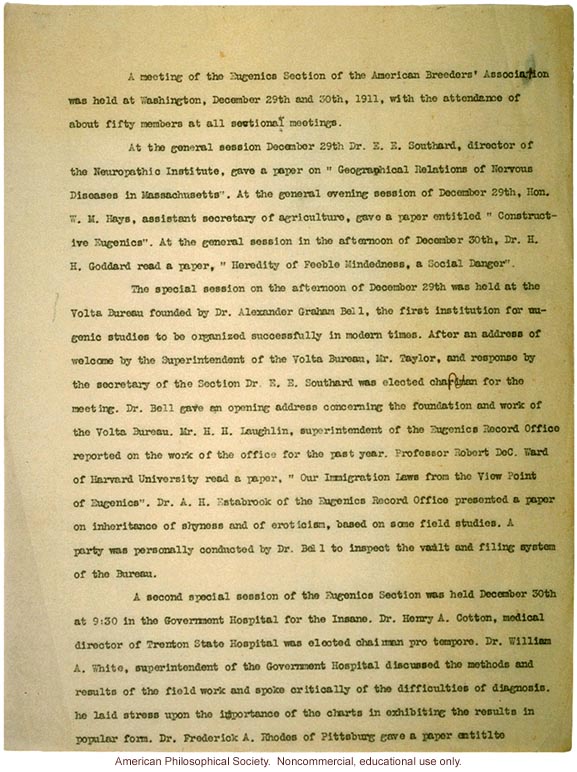 A meeting of the Eugenics Section of the American Breeders' Association was held at Washington, December 29th and 30th, 1911, with the attendance of about fifty members at all sectional meetings. At the general session December 29th Dr. E.H. Southard, director of the Neuropathic Institute, gave a paper on "Geographical Relations of Nervous Diseases in Massachusetts". At the general evening session of December 29th, Hon. W. M. Hays, assistant secretary of agriculture, gave a paper entitled, "Constructive Eugenics". At the general session in the afternoon of December 30th, Dr. H. H. Goddard read a paper, "Heredity of Feeble Mindedness, a Social Danger". The special session on the afternoon of December 29th was held at the Volta Bureau founded by Dr. Alexander Graham Bell, the first institution for eugenic studies to be organized successfully in modern times. After an address of welcome by the Superintendent of the Volta Bureau, Mr. Taylor, and response by the secretary of the Section Dr. E. E. Southard was elected chairman for the meeting. Dr. Bell gave an opening address concerning the foundation and work of the Volta Bureau. Mr. H. H. Laughlin, superintendent of the Eugenics Record Office reported on the work of the office for the past year. Professor Robert DeC. Ward of Harvard University read a paper, "Our Immigration Laws from the View Point of Eugenics". Dr. A. H. Estabrook of the Eugenics Record Office presented a paper on inheritance of shyness and of eroticism, based on some field studies. A party was personally conducted by Dr. Bell to inspect the vault and filing system of the Bureau. A second special session of the Eugenics Section was held December 30th at 9:30 in the Government Hospital for the Insane. Dr. Henry A. Cotton, medical director of Trenton State Hospital was elected chairman pro tempore. Dr. William A. White, superintendent of the Government Hospital discussed the methods and results of the field work and spoke critically of the difficulties of diagnosis. He laid stress upon the importance of the charts in exhibiting the results in popular form. Dr. Frederick A. Rhodes of Pittsburg[sic] gave a paper entitlto
Copyright 1999-2004: Cold Spring Harbor Laboratory; American Philosophical Society; Truman State University; Rockefeller Archive Center/Rockefeller University; University of Albany, State University of New York; National Park Service, Statue of Liberty National Monument; University College, London; International Center of Photography; Archiv zur Geschichte der Max-Planck-Gesellschaft, Berlin-Dahlem; and Special Collections, University of Tennessee, Knoxville.
The images and text in this Archive are solely for educational and scholarly uses. The materials may be used in digital or print form in reports, research, and other projects that are not offered for sale. Materials in this archive may not be used in digital or print form by organizations or commercial concerns, except with express permission.