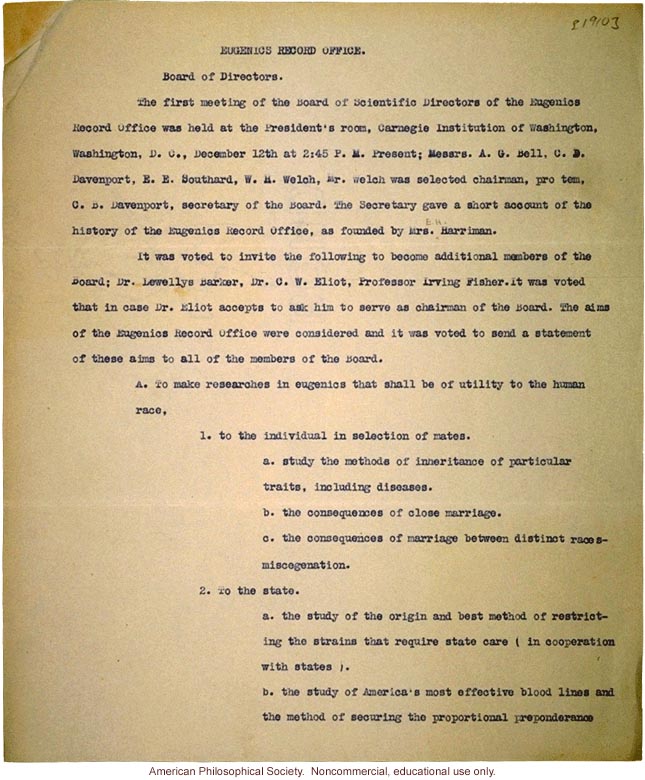 [NOTE image 418 is comprised of images 418 through 420] Eugenics Record Office. Board of Directors. The first meeting of the Board of Scientific Directors of the Eugenics Record Office was held at the President's room, Carnegie Institution of Washington, Washington, D. C., December 12th at 2:45 P.M. Present: Messrs. A. G. Bell, C. B. Davenport, E. E. Southard, W. H. Welch, Mr. Welch was selected chairman, pro tem, C. B. Davenport, secretary of the Board. The Secretary gave a short account of the history of the Eugenics Record Office, as founded by Mrs. Harriman. It was voted to invite the following to become additional members of the Board: Dr. Lewellys Barker, Dr. C. W. Eliot, Professor Irving Fisher. It was voted that in case Dr. Eliot accepts to ask him to serve as chairman of the Board. The aims of the Eugenics Record Office were considered and it was voted to send a statement of these aims to all of the members of the Board. A. To make researches in eugenics that shall be of utility to the human race, 1. to the individual in the selection of mates. a. study the methods of inheritance of particular traits, including diseases. b. The consequences of close marriage. c. The consequences of marriage between distinct races - miscegenation. 2. To the state. a. the study of the origin and best method of restricting the strains that require state care (in cooperation with states). b. The study of America's most effective blood lines and the method of securing the proportional preponderance 2. and increase of the best strains. 3. To the nation. To bring home to the government the desirability of more careful consideration of the family history of permanent immigrants. B. To publish the results of these researches. C. To conduct an administrative office, library, workers and other equipment necessary to carry out this purpose. It was voted that it was the aim of the Office to support investigations and not to undertake propaganda. It was voted to recommend to Mr. John D. Rockefeller the support of the following investigations;- 1. An analysis of feeble mindedness, especially an attempt to determine in how far feeble mindedness is due to a general failure of mental development at a particular stage and in how far to specific defects which do not interfere with the full development of other mental traits. For this investigation $125 per month is asked. 2. A study of a center of heavy incidence of insanity in Worcester County, Massachusetts. For this study with expenses $150 per month is asked. 3. A preliminary study of the sources of the better and the poorer strains of immigrants. For this investigation which would have to be carried on abroad $2000. are asked for one year. 4. A statistician to help work out results already collected and help prepare results for publication, $2000. for one year. It was voted to recommend to the Crokar Cancer Fund the study of cancer in a community in New York State characterized by special frequency of cancer at a cost of $140 per month. Dr. E. E. Southard submitted a memorandum concerning the study of eugenics / in Massachusetts, supporting the second proposed investigation. Meeting adjourned at 3:50 to reconvene at the call of the chairman. [signed] Chas B. Davenport Sec'y D/G
Copyright 1999-2004: Cold Spring Harbor Laboratory; American Philosophical Society; Truman State University; Rockefeller Archive Center/Rockefeller University; University of Albany, State University of New York; National Park Service, Statue of Liberty National Monument; University College, London; International Center of Photography; Archiv zur Geschichte der Max-Planck-Gesellschaft, Berlin-Dahlem; and Special Collections, University of Tennessee, Knoxville.
The images and text in this Archive are solely for educational and scholarly uses. The materials may be used in digital or print form in reports, research, and other projects that are not offered for sale. Materials in this archive may not be used in digital or print form by organizations or commercial concerns, except with express permission.