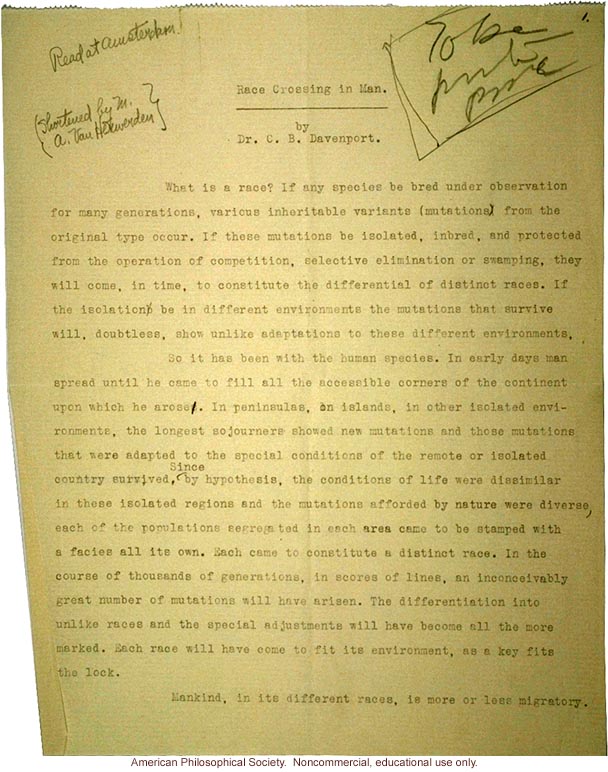 Race Crossing in Man. By Dr. C. B. Davenport [some handwritten marginalia] What is a race? If any species be bred under observation, for many generations, various inheritable variants (mutational) from the original type occur. If these mutations be isolated, inbred, and protected from the operation of competition, elective elimination or swamping, they will come, in time, to constitute the differential of distant races. If the isolation be in different environments the mutations that survive will, doubtless, show unlike adaptations to these different environments. So it has been with the human species. In early days man spread until he came to fill all the accessible corners of the continent upon which he arose. In peninsulas, on islands, in other isolated environments, the longest sojourners showed new mutations and those mutations that were adapted to the special conditions of the remote or isolated country survived. Since by hypothesis, the conditions of life were dissimilar in these isolated regions and the mutations afforded by nature were diverse, each of the populations segregated in each area came to be stamped with a facies all its own. Each came to constitute a distinct race. In the course of thousands of generations, the scores of lines, an inconceivably great number of mutations will have arisen. The differentiation into unlike races and the special adjustments will have become all the more marked. Each race will have come to fit the environment, as a key fits the lock. Mankind, in its different races, is more or less migratory.
Copyright 1999-2004: Cold Spring Harbor Laboratory; American Philosophical Society; Truman State University; Rockefeller Archive Center/Rockefeller University; University of Albany, State University of New York; National Park Service, Statue of Liberty National Monument; University College, London; International Center of Photography; Archiv zur Geschichte der Max-Planck-Gesellschaft, Berlin-Dahlem; and Special Collections, University of Tennessee, Knoxville.
The images and text in this Archive are solely for educational and scholarly uses. The materials may be used in digital or print form in reports, research, and other projects that are not offered for sale. Materials in this archive may not be used in digital or print form by organizations or commercial concerns, except with express permission.