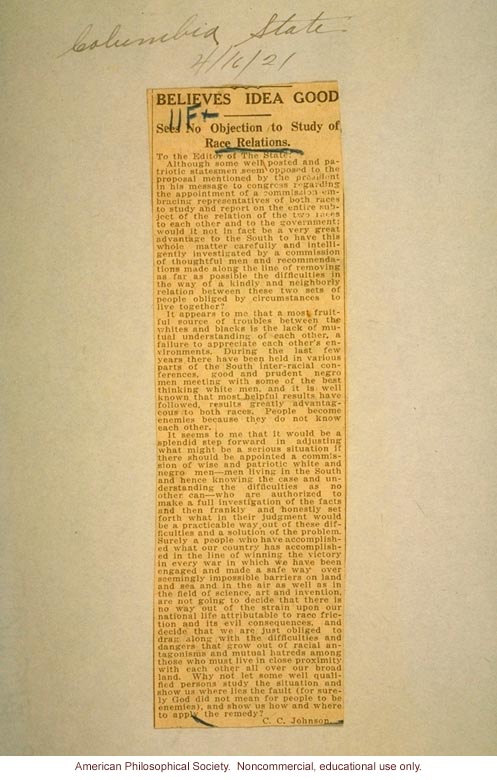 Columbia State 4/16/21 Believes Idea Good Sees No Objection to Study of Race Relations To the Editor of the State: Although some well-posted and patriotic statesmen seen opposed to the proposal mentioned by the president in his message to congress regarding the appointment of a commission embracing representatives of both races to study and report on the entire subject of the relation of the two races to each other and to the government: would it not in fact be a very great adventure to the South to have this whole matter carefully and intelligently investigated by a commission of thoughtful men and recommendations made along the line of removing as far as possible the difficulties in the way of a kindly and neighborly relation between these two sets of people obliged by circumstances to live together? It appears to me a most fruitful source of troubles between the whites and blacks is the lack of mutual understanding of each other, a failure to appreciate each other's environments. During the last few years there have been held in various parts of the South inter-racial conferences, good and prudent negro men meeting with some of the best thinking white men, and it is well known that most helpful results have followed, results greatly advantageous to both races. People become enemies because they do not know each other. It seems to me that it would be a splendid step forward in adjusting what might be a serious situation if there should be appointed a commission of wise and patriotic white and negro men - men living in the South and hence knowing the case and understanding the difficulties as no other can - who are authorized to make a full investigation of the facts and then frankly and honestly set forth what in their judgment would be a practicable way out of these difficulties and a solution of the problem. Surely a people who have accomplished what our country has accomplished in the line of winning the victory in every war is which we have been engaged and made a safe way over seemingly impossible barriers on land and sea, and in the air as well as in the field of science, art and invention, are not going to decide that there is no way out of the strain upon our national life attributable to race friction and its evil consequences, and decide that we are just obliged to drag along with the difficulties and dangers that grow out of racial antagonisms and mutual hatreds among those who must live in close proximity with each other all over out broad land. Why not let some well qualified persons study the situation and show us where lies the fruit (for surely God did not mean for people to be enemies), and show us how and where to apply this remedy? C. C. Johnson
Copyright 1999-2004: Cold Spring Harbor Laboratory; American Philosophical Society; Truman State University; Rockefeller Archive Center/Rockefeller University; University of Albany, State University of New York; National Park Service, Statue of Liberty National Monument; University College, London; International Center of Photography; Archiv zur Geschichte der Max-Planck-Gesellschaft, Berlin-Dahlem; and Special Collections, University of Tennessee, Knoxville.
The images and text in this Archive are solely for educational and scholarly uses. The materials may be used in digital or print form in reports, research, and other projects that are not offered for sale. Materials in this archive may not be used in digital or print form by organizations or commercial concerns, except with express permission.