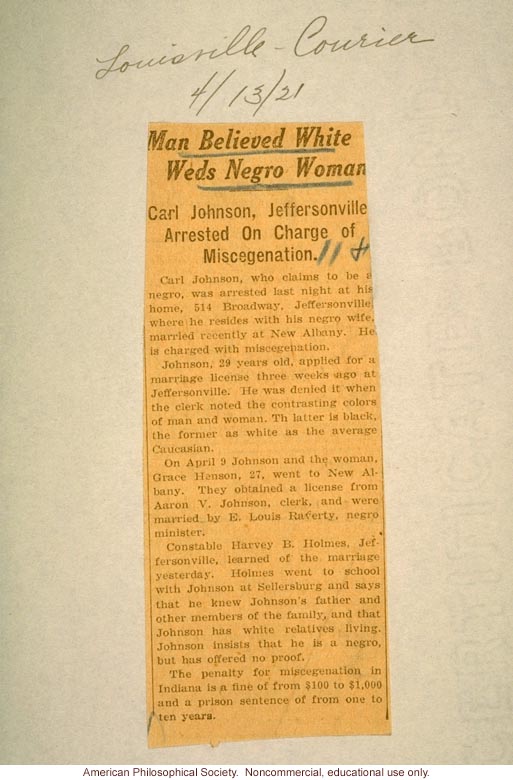 Louisville Courier 4/13/21 Man Believed White Weds Negro Woman Carl Johnson, Jeffersonville Arrested on Charge of Miscegenation. Carl Johnson, who claims to be a negro, was arrested last night at his home, 514 Broadway, Jeffersonville, where he resides with his negro wife, married recently at New Albany. He is charged with miscegenation. Johnson, 29 years old, applied for a marriage license three weeks ago at Jeffersonville. He was denied it when the clerk noted the contrasting colors of man and woman. The latter is black, the former as white as the average Caucasian. On April 9 Johnson and the woman, Grace Henson, 27, went to New Albany. They obtained a license from Aaron V. Johnson, clerk, and were married by E. Louis Rafferty, negro minister. Constable Harvey B. Holmes, Jeffersonville, learned of the marriage yesterday. Holmes went to school with Johnson at Sellersburg and says that he knew Johnson's father and other members of the family, and that Johnson has white relatives living. Johnson insists that he is a negro, but has offered no proof. The penalty for miscegenation is a fine of from $100 to $1,000 and a prison sentence of from one to ten years.
Copyright 1999-2004: Cold Spring Harbor Laboratory; American Philosophical Society; Truman State University; Rockefeller Archive Center/Rockefeller University; University of Albany, State University of New York; National Park Service, Statue of Liberty National Monument; University College, London; International Center of Photography; Archiv zur Geschichte der Max-Planck-Gesellschaft, Berlin-Dahlem; and Special Collections, University of Tennessee, Knoxville.
The images and text in this Archive are solely for educational and scholarly uses. The materials may be used in digital or print form in reports, research, and other projects that are not offered for sale. Materials in this archive may not be used in digital or print form by organizations or commercial concerns, except with express permission.