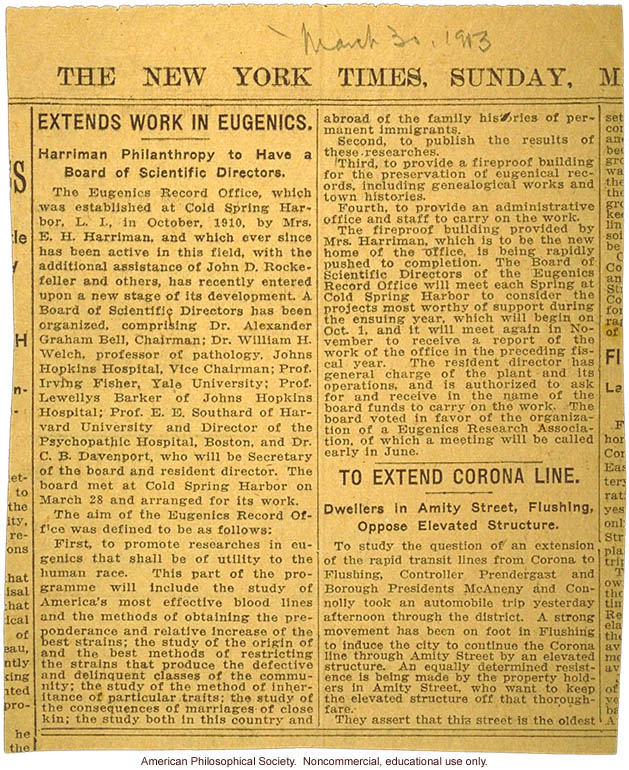 The New York Times, Sunday, M Extends Work in Eugenics Harriman Philanthropy to Have a Board of Scientific Directors. The Eugenics Record Office, which was established at Cold Spring Harbor, L. I., in October, 1910, by Mrs. E. H. Harriman, and which ever since has been active in this field, with the additional assistance of John D. Rockefeller and others, has recently entered upon a new stage of development. A Board of Scientific Directors has been organized, comprising Dr. Alexander Graham Bell, Chairman; Dr. William H. Welch, professor of pathology, Johns Hopkins Hospital, Vice Chairman; Prof. Irving Fisher, Yale University; Prof. Lewellys Barker of Johns Hopkins Hospital; Prof. E. E. Southard of Harvard University and Director of the Psychopathic Hospital, Boston, and Dr. C. B. Davenport, who will be Secretary of the board and resident director. The board met at Cold Spring Harbor on March 28 and arranged for its work. The aim of the Eugenics Record Office was defined to be as follows: First, to promote researches in eugenics that shall be of utility to the human race. This part of the programme will include the study of America's most effective blood lines and the methods of obtaining the preponderance and relative increase of the best strains; the study of the origin of and the best methods of restricting the strains that produce the defective and delinquent classes of the community; the study of the method of inheritance of particular traits; the study of the consequences of marriages of close kin; the study both of this country and abroad of the family histories of permanent immigrants. Second, to publish the results of these researches. Third, to provide a fireproof building for the preservation of eugenical records, including genealogical works and town histories. Fourth, to provide an administrative office and staff to carry on the work. The fireproof building provided by Mrs. Harriman, which is to be the new home of the office, is being rapidly pushed to completion. The Board of Scientific Directors of the Eugenics Record Office will meet each Spring at Cold Spring Harbor to consider the projects most worthy of support during the ensuing year, which will begin on Oct. 1, and it will meet again in November to receive a report of the work of the office in the preceding fiscal year. The resident director has general charge of the plant and its operations, and is authorized to ask for and receive in the name of the board funds to carry on the work. The board voted in favor of the organization of a Eugenics Research Association, of which a meeting will be called early in June. To Extend Corona Line. Dwellers in Amity Street, Flushing, Oppose Elevated Structure. To study the question of an extension of the rapid transit lines from Corona to Flushing, Controller Prendergast and Borough Presidents McAneny and Connolly took an automobile trip yesterday afternoon through the district. A strong movement has been on foot in Flushing to induce the city to continue the Corona line through Amity Street by an elevated structure. An equally determined resistence[sic] is being made by the property holders in Amity Street, who want to keep the elevated structure off that thoroughfare. They assert that this street is the oldest
Copyright 1999-2004: Cold Spring Harbor Laboratory; American Philosophical Society; Truman State University; Rockefeller Archive Center/Rockefeller University; University of Albany, State University of New York; National Park Service, Statue of Liberty National Monument; University College, London; International Center of Photography; Archiv zur Geschichte der Max-Planck-Gesellschaft, Berlin-Dahlem; and Special Collections, University of Tennessee, Knoxville.
The images and text in this Archive are solely for educational and scholarly uses. The materials may be used in digital or print form in reports, research, and other projects that are not offered for sale. Materials in this archive may not be used in digital or print form by organizations or commercial concerns, except with express permission.