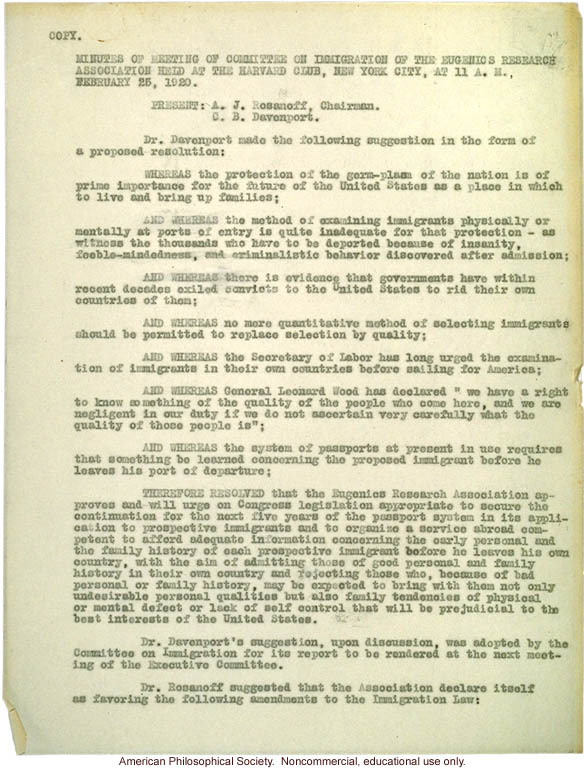 COPY. Minutes of Meeting of Committee on Immigration of the Eugenics Research Association held at the Harvard Club, New York City, at 11 A.M., February 25, 1920. Present: A. J. Rosanhoff, Chairman. C. B. Davenport. Dr. Davenport made the following suggestion in the form of a proposed resolution: Whereas the protection of the germ-plasm of the nation is of prime importance for the future of the United States as a place in which to live and bring up families; And whereas the method of examining immigrants physically or mentally at ports of entry is quite inadequate for that protection - as witness the thousands who have to be deported because of insanity, feeble-mindedness, and criminalistic behavior discovered after admission; And whereas there is evidence that governments have within recent decades exiled convicts to the United States to rid their own countries of them; And whereas no more quantitative method of selecting immigrants should be permitted to replace selection by quality; And whereas the Secretary of Labor has long urged the examination of immigrants in their own countries before sailing for America; And whereas General Leonard Wood has declared "we have a right to know something of the quality of the people who come here, and we are negligent in our duty if we do not ascertain very carefully what the quality of those people is"; And whereas the system of passports at present in use requires that something be learned concerning the proposed immigrant before he leaves his port of departure; Therefore resolved that the Eugenics Research Association approves and will urge on Congress legislation appropriate to secure the continuation for the next five years of the passport system in its application to prospective immigrants and to organize a service abroad competent to afford adequate information concerning the early personal and the family history of each prospective immigrant before he leaves his own country, with the aim of admitting those of good personal and family history in their own country and rejecting those who, because of bad personal or family history, may be expected to bring with them not only undesirable personal qualities but also family tendencies of physical or mental defect or lack of self control that will be prejudicial to the best interests of the United States. Dr. Davenport's suggestion, upon discussion, was adopted by the Committee on Immigration for its report to be rendered at the next meeting of the Executive Committee. Dr. Rosanhoff suggested that the Association declare itself as favoring the following amendments to the Immigration Law:
Copyright 1999-2004: Cold Spring Harbor Laboratory; American Philosophical Society; Truman State University; Rockefeller Archive Center/Rockefeller University; University of Albany, State University of New York; National Park Service, Statue of Liberty National Monument; University College, London; International Center of Photography; Archiv zur Geschichte der Max-Planck-Gesellschaft, Berlin-Dahlem; and Special Collections, University of Tennessee, Knoxville.
The images and text in this Archive are solely for educational and scholarly uses. The materials may be used in digital or print form in reports, research, and other projects that are not offered for sale. Materials in this archive may not be used in digital or print form by organizations or commercial concerns, except with express permission.