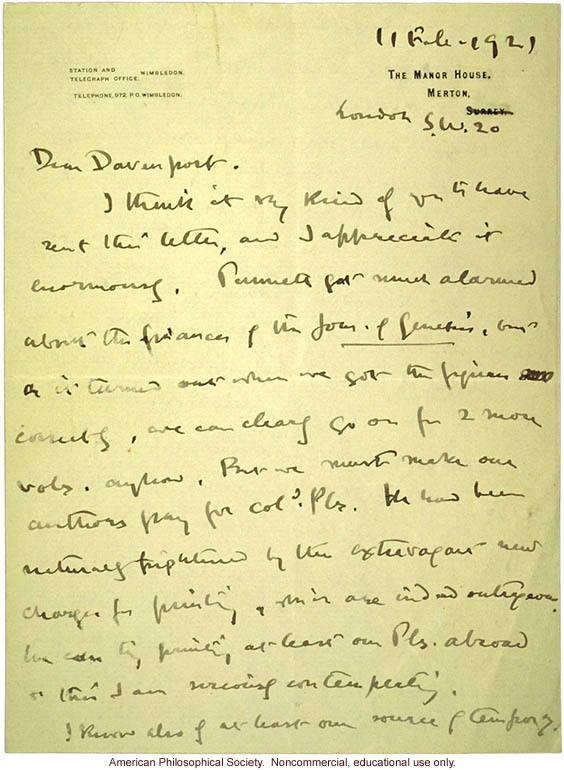 (NOTE: this image is comprised of images 528 through 533) 11 Feb 1921 Station and Telegraph Office Wimbledon Telephone 972 P.O. Wimbledon The Manor House, Merton, London S. W. 20 Dear Dr. Davenport, I think it is very kind of you to have sent the letter, and I appreciate it enormously. Purmett got much alarmed about the finances of the Journal of Genetics, but as it turned out when we got the figures correctly, we can clearly go on for 2 more vols, anyhow. But we must make our authors pay for col? Pls. We have been [illegible] by the extravagant new charges for printing, [illegible] are [illegible] at least one Pls. [illegible] this I am seriously contemplating. I know also of at least one source of temporary / help - so our case is not desperate. I do not think it right that people in the financial position of our brother-workers on your side (or on this) should personally subscribe. We would be [illegible]ful to hear that they are now doing so. We shall pull through money-wise for a while anyhow. What I do not like is going on, is labour in the modern fashion. Here it is an epidemic, & most dangerous. No one dare say. Sooner or later I do think these [illegible] as yours and mine will come to an end. When labour has been in command for a generation or two, I think the new dark age will define itself [illegible]. About the Eugenics Congress I have vacillated sevl. Times. I have also an invitation from Osborn, accompanied by yours is, by an offer on the pleasant, [illegible] U.S. scale! I was sorely [illegible] to come + see you again. / Leonard Darwin also wishes me to go. But dearer of these secondary and very attractive considerations, the real question is whether we ought not to keep genetics separate, and I cannot doubt that [illegible]. I know you take the other view but to me genetics is the 'big thing' - far too big to be taken on as an [appendage] of eugenics, which is more of an accidental development of genetics. I wish it well, as a commonsensical application, though I can't make it my job. With hesitation I have accepted the Galton Lecture to be given to the Eugenics Soc. Next week, and shall say something of this kind / in my introduction. Yes, I wish Morgan and the Drosopholites were nearer. It ought not to matter, but it does. I try to keep up with it all, holding only skin of my teeth. The modern way of research is too pragmatical for my view. I do like a bit more finish. "Get on!" is not a bad motto. Still I wish it didn't lean to passing a drawing of a Game Bantam Cock without spurs. [not sure about previous sentence..] In a paper on [symbol]Sex Char. [illegible] like that raise doubts. [strikeout] Of course that bird may have been spurless. But was it? [illegible]. This is pure pedantry no doubt - a warping of the [illegible] brought up on Latin prose. But don't mistake - I do admire Morgan and the char. work, and am quite prepared to believe, if and when I must. Some days I am much drawn this way. At other times I see the difficulties more. / (3) Station and Telegraph Office. Wimbledon. Telephone 972. P.O. Wimbledon. The Manor House, Merton, Surrey. What properties are off in the number of "bolt-holes". [illegible], "genes," modifying linkage, or similar expedients may all be [illegible], but to get proof, each [illegible] must [illegible] independent. [illegible] on its own bottom. I have lately been worrying over Goldschmidt. He has not got his story so straight as he pretends and that is not encouraging. By the way I see Sturtevant has an entirely new set of intersexes[?] or gynandrome[?]. Well, there is plenty of stuff to / disentangle now. It seems a long time since - wasn't it Metz, or Johnson? - showed me Drosophila for the first time at [illegible]? A [illegible] mess it looked then. [illegible closing initials] W. Bateson
Copyright 1999-2004: Cold Spring Harbor Laboratory; American Philosophical Society; Truman State University; Rockefeller Archive Center/Rockefeller University; University of Albany, State University of New York; National Park Service, Statue of Liberty National Monument; University College, London; International Center of Photography; Archiv zur Geschichte der Max-Planck-Gesellschaft, Berlin-Dahlem; and Special Collections, University of Tennessee, Knoxville.
The images and text in this Archive are solely for educational and scholarly uses. The materials may be used in digital or print form in reports, research, and other projects that are not offered for sale. Materials in this archive may not be used in digital or print form by organizations or commercial concerns, except with express permission.