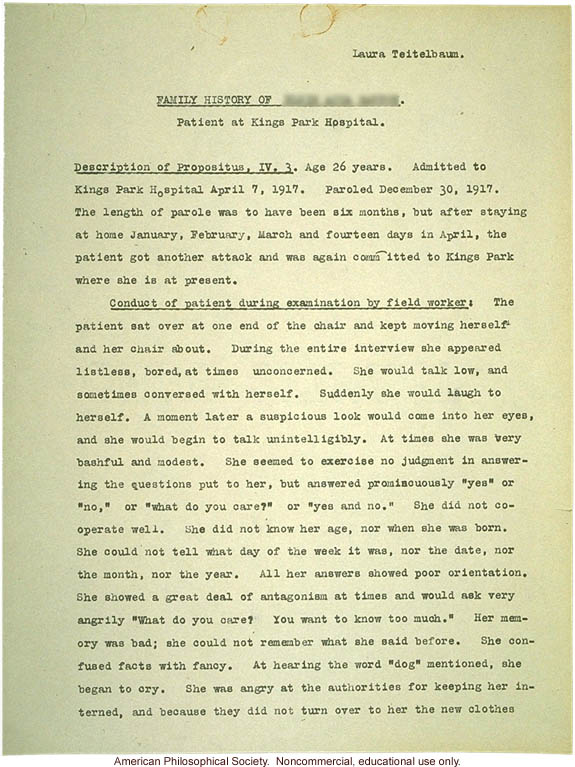 Laura Teitelbaum Family History of [obscured] Patient at Kings Park Hospital Description of Propositus, IV, 3. Age 26 years. Admitted to Kings Park Hospital April 7, 1917. Paroled December 30, 1917. The length of parole was to have been six months, but after staying at home January, February, March, and fourteen days in April, the patient got another attack and was again committed to Kings Park where she is at present. Conduct of patient during examination by field worker. The patient sat over at one end of the chair and kept moving herself and her chair about. During the entire interview she appeared listless, bored, and at times unconcerned. She would talk low, and sometimes conversed with herself. Suddenly she would laugh to herself. A moment later a suspicious look would come into her eyes, and she would begin to talk unintelligibly. At times she was very bashful and modest. She seemed to exercise no judgment in answering the questions put to her, but answered promiscuously "yes" or "no," or "what do you care?" or "yes and no." She did not cooperate well. She did not know her age, nor when she was born. She could not tell what day of the week it was, nor the date, nor the month, nor the year. All her answers showed poor orientation. She showed a great deal of antagonism at times and would ask very angrily "What do you care? You want to know too much." Her memory was bad; she could not remember what she said before. She confused facts with fancy. At hearing the word "dog" mentioned, she began to cry. She was angry at the authorities for keeping her interned, and because they did not turn over to her the new clothes
Copyright 1999-2004: Cold Spring Harbor Laboratory; American Philosophical Society; Truman State University; Rockefeller Archive Center/Rockefeller University; University of Albany, State University of New York; National Park Service, Statue of Liberty National Monument; University College, London; International Center of Photography; Archiv zur Geschichte der Max-Planck-Gesellschaft, Berlin-Dahlem; and Special Collections, University of Tennessee, Knoxville.
The images and text in this Archive are solely for educational and scholarly uses. The materials may be used in digital or print form in reports, research, and other projects that are not offered for sale. Materials in this archive may not be used in digital or print form by organizations or commercial concerns, except with express permission.