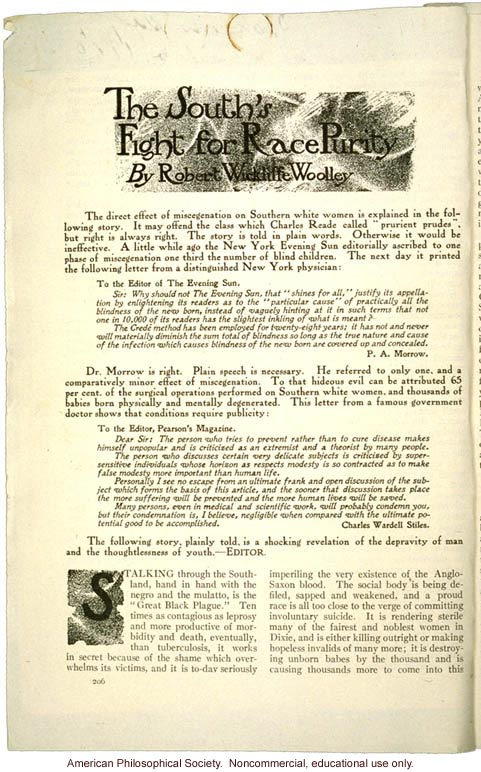 The South's Fight for Race Purity By Robert Wickliffe Wooley The direct effect of miscegenation on Southern white women is explained in the following story. It may offend the class which Charles Reade called "prurient prudes", but right is always right. The story is told in plain words. Otherwise it would be ineffective. A little while ago the New York Evening Sun editorially ascribed to one phase of miscegenation one third the number of blind children. The next day it printed the following letter from a distinguished New York physician: To the Editor of the Evening Sun. Sir: Why should not the Evening Sun, that "shines for all," justify its appellation by enlightening its readers as the particular cause of practically all the blindness of the new born, instead of vaguely hinting at it in such terms that not one in 10,000 of its readers has the slightest inkling of what is meant? The Crede method has been employed for twenty-eight years; it has not and never will materially diminish the sum total of blindness so long as the true nature and cause of the infection which causes blindness of the new born are covered up and concealed. P.A. Morrow. Dr. Morrow is right. Plain speech is necessary. He referred to only one, and a comparatively minor effect of miscegenation. To that hideous evil can be attributed 65 per cent. of the surgical operations performed on Southern white women, and thousands of babies born physically and mentally degenerated. This letter is from a famous government doctor shows that conditions require publicity: To the Editor, Pearson's Magazine. Dear Sir: The person who tries to prevent rather than to cure disease makes himself unpopular and is criticized as an extremist and a theorist by many people. The person who discusses certain very delicate subjects is criticized by super-sensitive individuals whose horizon as respects modesty is so contracted as to make false modesty more important than human life. Personally I see no escape from an ultimate frank and open discussion of the subject which forms the basis of this article, and the sooner that discussion takes place the more suffering will be prevented and the more human lives will be saved. Many persons, even in medical and scientific work, will probably condemn you, but their condemnation is, I believe, negligible when compared with the ultimate potential good to be accomplished. Charles Wendell Stiles. The following story, plainly told, is a shocking revelation of the depravity of man and the thoughtlessness of youth. - Editor. Stalking through the Southland, hand in hand with the negro and the mulatto, is the "Great Black Plague." Ten times as contagious as leprosy and more productive of morbidity and death, eventually, than tuberculosis, it works in secret because of the shame which overwhelms its victims, and it is to-day seriously imperiling the very existence of the Anglo-Saxon blood. The social body is being defiled, sapped and weakened, and a proud race is all too close to the verge of committing involuntary suicide. It is rendering sterile many of the fairest and noblest women in Dixie, and is either outright or making hopeless invalids of many more; it is destroying unborn babies by the thousand and is causing thousands more to come into this 206
Copyright 1999-2004: Cold Spring Harbor Laboratory; American Philosophical Society; Truman State University; Rockefeller Archive Center/Rockefeller University; University of Albany, State University of New York; National Park Service, Statue of Liberty National Monument; University College, London; International Center of Photography; Archiv zur Geschichte der Max-Planck-Gesellschaft, Berlin-Dahlem; and Special Collections, University of Tennessee, Knoxville.
The images and text in this Archive are solely for educational and scholarly uses. The materials may be used in digital or print form in reports, research, and other projects that are not offered for sale. Materials in this archive may not be used in digital or print form by organizations or commercial concerns, except with express permission.