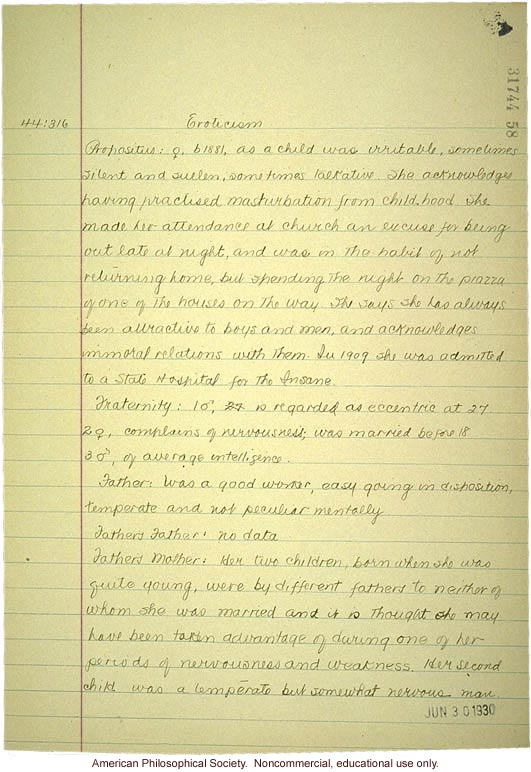 [document identification number]44:316 [end document identification number] Eroticism Propositus: [Venus symbol], b1881, as a child was irritable, sometimes silent and sullen, sometimes talkative. She acknowledges having practised masturbation from childhood. She made her attendance at church an excuse for being out late at night, and was in the habit of not returning home, but spending the night on the piazza of one of the houses on the way. She says she has always been attractive to boys and men and acknowledges immoral relations with them. In 1909 she was admitted to a State Hospital for the Insane. Fraternity: 1 [Mars symbol], [strikeout] 27 [end strikeout] is regarded as eccentric at 27. 2 [Venus symbol], complains of nervousness; was married before 18. 3 [Mars symbol], of average intelligence. Father: was a good worker, easy going in disposition, temperate and not peculiar mentally. Father's father: no data Father's Mother: Her two children, born when she was quite young, were by different fathers to neither of whom she was married and it is thought she may have been taken advantage of during one of her periods of nervousness and weakness. Her second child was a temperate but somewhat nervous man. [date stamp] June 30 1930 [end date stamp]
Copyright 1999-2004: Cold Spring Harbor Laboratory; American Philosophical Society; Truman State University; Rockefeller Archive Center/Rockefeller University; University of Albany, State University of New York; National Park Service, Statue of Liberty National Monument; University College, London; International Center of Photography; Archiv zur Geschichte der Max-Planck-Gesellschaft, Berlin-Dahlem; and Special Collections, University of Tennessee, Knoxville.
The images and text in this Archive are solely for educational and scholarly uses. The materials may be used in digital or print form in reports, research, and other projects that are not offered for sale. Materials in this archive may not be used in digital or print form by organizations or commercial concerns, except with express permission.