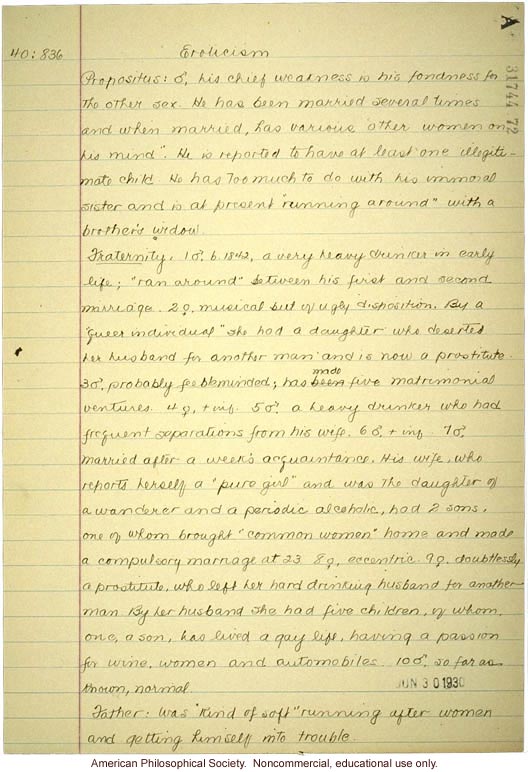 [document identification number]40:836 [end document identification number] Eroticism Propositus: [Mars symbol], his chief weakness is his fondness for the other sex. He has been married several times and when married, has various "other women on his mind". He is reported to have at least one illegitimate child. He has too much to do with his immoral sister and is at present "running around" with a brother's widow. Fraternity: 1 [Mars symbol], b. 1842, a very heavy drinker in early life; "ran around" between his first and second marriage. 2 [Venus symbol], musical but of ugly disposition. By a "queer individual" she had a daughter who deserted her husband for another man and is now a prostitute. 3 [Mars symbol], probably feebleminded; has [strikeout] been [end strikeout] made five matrimonial ventures. 4 [Venus symbol], + inf. 5 [Mars symbol], a heavy drinker who had frequent separations from his wife. 6 [Mars symbol], + inf. 7 [Mars symbol], married after a week's acquaintance. His wife, who reports herself a "pure girl" and was the daughter of a wanderer and a periodic alcoholic, had 2 sons, one of whom brought "common women" home and made a compulsory marriage at 23. 8 [Venus symbol], eccentric. 9 [Venus symbol], doubtlessly a prostitute, who left her hard drinking husband for another man. By her husband she had five children, of whom, one, a son, has lived a gay life, having a passion for wine, women and automobiles. 10 [Mars symbol], so far as known, normal. Father: was "kind of soft" running after women and getting himself into trouble.
Copyright 1999-2004: Cold Spring Harbor Laboratory; American Philosophical Society; Truman State University; Rockefeller Archive Center/Rockefeller University; University of Albany, State University of New York; National Park Service, Statue of Liberty National Monument; University College, London; International Center of Photography; Archiv zur Geschichte der Max-Planck-Gesellschaft, Berlin-Dahlem; and Special Collections, University of Tennessee, Knoxville.
The images and text in this Archive are solely for educational and scholarly uses. The materials may be used in digital or print form in reports, research, and other projects that are not offered for sale. Materials in this archive may not be used in digital or print form by organizations or commercial concerns, except with express permission.