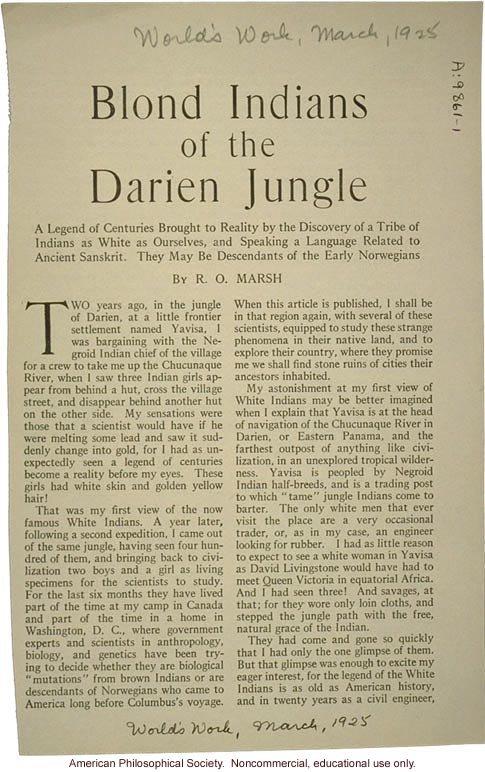 [handwritten note] World's Work, March, 1925 [end handwritten note] [handwritten document identification number] A:9861 -1 [end handwritten document identification number] Blond Indians of the Darien Jungle A Legend of Centuries Brought to Reality by the Discovery of a Tribe of Indians as White as Ourselves, and Speaking a Language Related to Ancient Sanskrit. They May Be Descendants of the Early Norwegians By R. O. MARSH TWO years ago, in the jungle of Darien, at a little frontier settlement named Yavisa, I was bargaining with the Negroid Indian chief of the village for a crew to take me up the Chucunaque River, when I saw three Indian girls appear from behind a hut, cross the village street, and disappear behind another hut on the other side. My sensations were those that a scientist would have if he were melting some lead and saw it suddenly changed into gold, for I had as unexpectedly seen a legend of centuries become a reality before my eyes. These girls had white skin and golden yellow hair! That was my first view of the now famous White Indians. A year later, following a second expedition, I came out of the same jungle, having seen four hundred of them, and bringing back to civilization two boys and a girl as living specimens for the scientists to study. For the last six months they have lived part of the time at my camp in Canada and part of the time in a home in Washington D. C., where government experts and scientists in anthropology, biology, and genetics have been trying to decide whether they are biological "mutations" from brown Indians or are descendants of Norwegians who came to America long before Columbus's voyage. When this article is published, I shall be in that region again, with several of these scientists, equipped to study these strange phenomena in their native land, and to explore their country, where they promise me we shall find stone ruins of cities their ancestors inhabited. My astonishment at my first view of White Indians may be better imagined when I explain that Yavisa is at the head of navigation of the Chucunaque River in Darien, or Eastern Panama, and the farthest outpost of anything like civilization, in an unexplored tropical wilderness. Yavisa is peopled by Negroid Indian half-breeds, and is a trading post to which "tame" jungle Indians come to barter. The only white men that ever visit the place are a very occasional trader, or, as in my case, an engineer looking for rubber. I had as little reason to expect to see a white woman in Yavisa as David Livingstone would have had to meet Queen Victoria in equatorial Africa. And I had see three! And savages, at that; for they wore only loin cloths, and stepped the jungle path with the free, natural grace of the Indian. They had come and gone so quickly that I had only the one glimpse of them. But that glimpse was enough to excite my eager interest, for the legend of the White Indians is as old as American history, and in twenty years as a civil engineer,
Copyright 1999-2004: Cold Spring Harbor Laboratory; American Philosophical Society; Truman State University; Rockefeller Archive Center/Rockefeller University; University of Albany, State University of New York; National Park Service, Statue of Liberty National Monument; University College, London; International Center of Photography; Archiv zur Geschichte der Max-Planck-Gesellschaft, Berlin-Dahlem; and Special Collections, University of Tennessee, Knoxville.
The images and text in this Archive are solely for educational and scholarly uses. The materials may be used in digital or print form in reports, research, and other projects that are not offered for sale. Materials in this archive may not be used in digital or print form by organizations or commercial concerns, except with express permission.