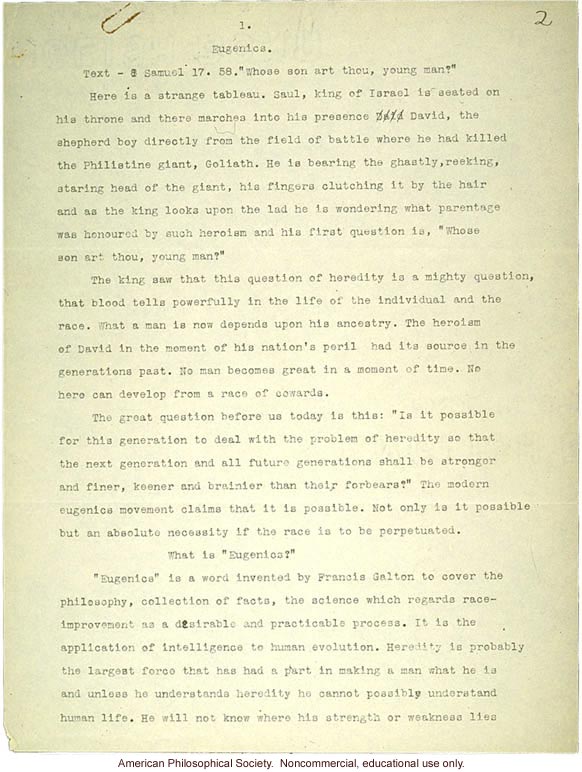 [page number] 1. [end page number] Eugenics. Text - 8 Samuel 17. 58. "Whose son art thou, young man?" Here is a strange tableau. Saul, king of Israel is seated on his throne and there marches into his presence [strikeout] Daid [end strikeout] David, the shepherd boy directly from the field of battle where he had killed the Philistine giant, Goliath. He is bearing the ghastly, reeking, staring head of the giant, his fingers clutching it by the hair and as the king looks upon the lad he is wondering what parentage was honoured by such heroism and his first question is, "Whose son art thou, young man?" The king saw that this question of heredity is a mighty question, that blood tells powerfully in the life of the individual and the race. What a man is now depends upon his ancestry. The heroism of David in the moment of his nation's peril had its source in the generations past. No man becomes great in a moment of time. No hero can develop from a race of cowards. The great question before us today is this: "Is it possible for this generation to deal with the problem of heredity so that the next generation and all future generations shall be stronger and finer, keener and brainier than their forbears?" The modern eugenics movement claims that it is possible. Not only is it possible but an absolute necessity if the race is to be perpetuated. What is "Eugenics?" "Eugenics" is a word invented by Francis Galton to cover the philosophy, collection of facts, the science which regards race-improvement as a desirable and practicable process. It is the application of intelligence to human evolution. Heredity is probably the largest force that has had a part in making a man what he is and unless he understands heredity he cannot possibly understand human life. He will not know where his strength or weakness lies
Copyright 1999-2004: Cold Spring Harbor Laboratory; American Philosophical Society; Truman State University; Rockefeller Archive Center/Rockefeller University; University of Albany, State University of New York; National Park Service, Statue of Liberty National Monument; University College, London; International Center of Photography; Archiv zur Geschichte der Max-Planck-Gesellschaft, Berlin-Dahlem; and Special Collections, University of Tennessee, Knoxville.
The images and text in this Archive are solely for educational and scholarly uses. The materials may be used in digital or print form in reports, research, and other projects that are not offered for sale. Materials in this archive may not be used in digital or print form by organizations or commercial concerns, except with express permission.