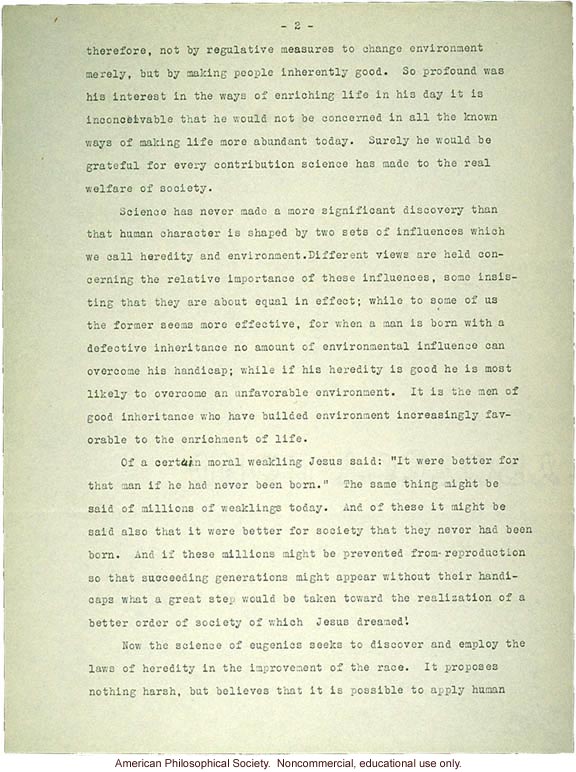 [page number] -2- [end page number] therefore, not by regulative measures to change environment merely, but by making people inherently good. So profound was his interest in the ways of enriching life in his day it is inconceivable that he would not be concerned in all the known ways of making life more abundant today. Surely he would be grateful for every contribution science has made to the real welfare of society. Science has never made a more significant discovery than that human character is shaped by two sets of influences which we call heredity and environment. Different views are held concerning the relative importance of these influences, some insisting that they are about equal in effect; while to some of us the former seem more effective, for when a man is born with a defective inheritance no amount of environmental influence can overcome his handicap; while if his heredity is good he is most likely to overcome an unfavorable environment. It is the men of good inheritance who have builded environment increasingly favorable to the enrichment of life. Of a certain moral weakling Jesus said: "It were better for that man if he had never been born." The same thing might be said of millions of weaklings today. And of these it might be said also that it were better for society that they never had been born. And if these millions might be prevented from reproduction so that succeeding generations might appear without their handicaps what a great step would be taken toward the realization of a better order of society of which Jesus dreamed! Now the science of eugenics seeks to discover and employ the laws of heredity in the improvement of the race. It proposes nothing harsh, but believes that it is possible to apply human
Copyright 1999-2004: Cold Spring Harbor Laboratory; American Philosophical Society; Truman State University; Rockefeller Archive Center/Rockefeller University; University of Albany, State University of New York; National Park Service, Statue of Liberty National Monument; University College, London; International Center of Photography; Archiv zur Geschichte der Max-Planck-Gesellschaft, Berlin-Dahlem; and Special Collections, University of Tennessee, Knoxville.
The images and text in this Archive are solely for educational and scholarly uses. The materials may be used in digital or print form in reports, research, and other projects that are not offered for sale. Materials in this archive may not be used in digital or print form by organizations or commercial concerns, except with express permission.