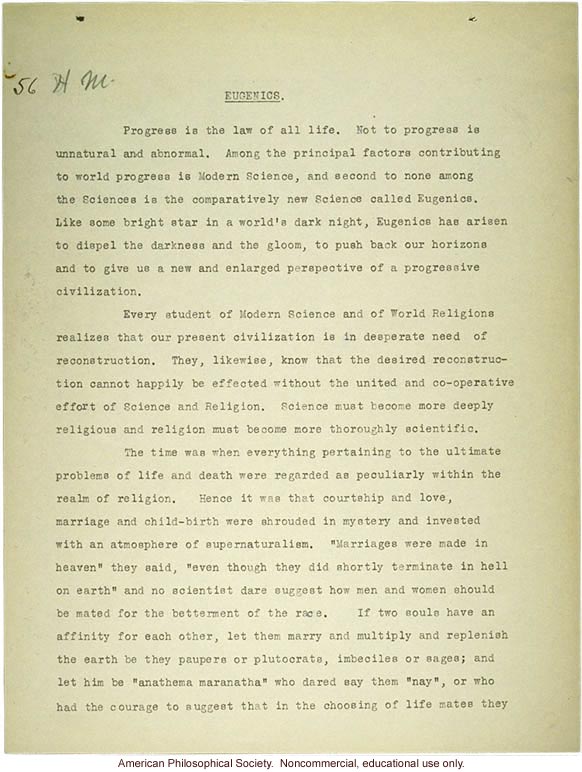 [page heading] EUGENICS. [end page heading] Progress is the law of all life. Not to progress is unnatural and abnormal. Among the principal factors contributing to world progress in Modern Science, and second to none among the Sciences is the comparatively new Science called Eugenics. Like some bright star in a world's dark night, Eugenics has arisen to dispel the darkness and the gloom, to push back our horizons and to give us a new and enlarged perspective of a progressive civilization. Every student of Modern Science and of World Religions realizes that our present civilization is in desperate need of reconstruction. They, likewise, know that the desired reconstruction cannot happily be effected without the united and co-operative effort of Science and Religion. Science must become more deeply religious and religion must become more thoroughly scientific. The time was when everything pertaining to the ultimate problems of life and death were regarded as peculiarly within the realm of religion. Hence it was that courtship and love, marriage and child-birth were shrouded in mystery and invested with an atmosphere of supernaturalism. "Marriages were made in heaven" they said, "even though they did shortly terminate in hell on earth" and no scientist dare suggest how men and women should be mated for the betterment of the race. If two souls have an affinity for each other, let them marry and multiply and replenish the earth be they paupers or plutocrats, imbeciles or sages; and let him be "anathema maranatha" who dared say them "nay", or who had the courage to suggest that in the choosing of life mates they
Copyright 1999-2004: Cold Spring Harbor Laboratory; American Philosophical Society; Truman State University; Rockefeller Archive Center/Rockefeller University; University of Albany, State University of New York; National Park Service, Statue of Liberty National Monument; University College, London; International Center of Photography; Archiv zur Geschichte der Max-Planck-Gesellschaft, Berlin-Dahlem; and Special Collections, University of Tennessee, Knoxville.
The images and text in this Archive are solely for educational and scholarly uses. The materials may be used in digital or print form in reports, research, and other projects that are not offered for sale. Materials in this archive may not be used in digital or print form by organizations or commercial concerns, except with express permission.