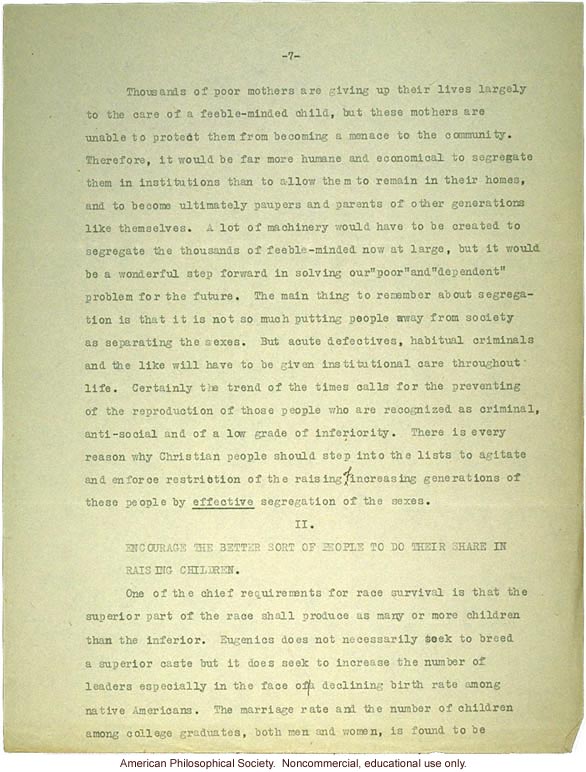 [page number] -7- [end page number] Thousands of poor mothers are giving up their lives largely to the care of the feeble-minded child, but these mothers are unable to protect them from becoming a menace to the community. Therefore, it would be far more humane and economical to segregate them in institutions than to allow them to remain in their homes, and to become ultimately paupers and parents of other generations like themselves. A lot of machinery would have to be created to segregate the thousands of feeble-minded now at large, but it would be a wonderful step forward in solving our "poor" and "dependent" problem for the future. The main thing to remember about segregation is that it is not so much putting people away from society as separating the sexes. But acute defectives, habitual criminals and the like will have to be given institutional care throughout life. Certainly the trend of the times calls for the preventing of the reproduction of those people who are recognized as criminal, anti-social and of a low grade of inferiority. There is every reason why Christian people should step into the lists to agitate and enforce restriction of the raising of increasing generations of these people by effective segregation of the sexes. [number within text] II. [end number within text] [crosshead within text]ENCOURAGE THE BETTER SORT OF PEOPLE TO DO THEIR SHARE IN RAISING CHILDREN. [end crosshead] One of the chief requirements for race survival is that the superior part of the race shall produce as many or more children than the inferior. Eugenics does not necessarily seek to bread a superior caste but it does seek to increase the number of leaders especially in the face of declining birth rate among native Americans. The marriage rate and the number of children among college graduates, both men and women, is found to be
Copyright 1999-2004: Cold Spring Harbor Laboratory; American Philosophical Society; Truman State University; Rockefeller Archive Center/Rockefeller University; University of Albany, State University of New York; National Park Service, Statue of Liberty National Monument; University College, London; International Center of Photography; Archiv zur Geschichte der Max-Planck-Gesellschaft, Berlin-Dahlem; and Special Collections, University of Tennessee, Knoxville.
The images and text in this Archive are solely for educational and scholarly uses. The materials may be used in digital or print form in reports, research, and other projects that are not offered for sale. Materials in this archive may not be used in digital or print form by organizations or commercial concerns, except with express permission.