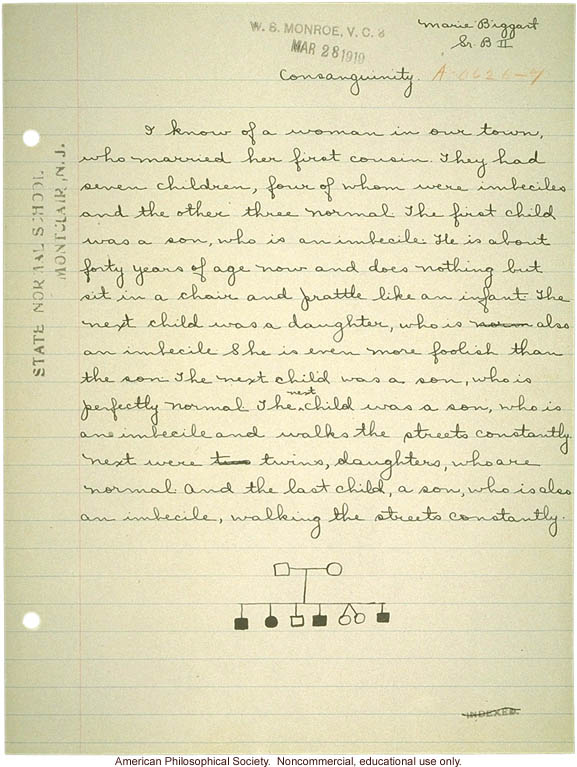 W.S. Monroe, V. C. 8 Mar 28 1919 Marie Biggart Sr B II Consanguinity I know of a woman in our town, who married her first cousin. They had seven children, four of whom were imbeciles and the other three normal. The first child was a son, who is an imbecile. He is about forty years of age now and does nothing but sit in a chair and prattle like an infant. The next child was a daughter, who is also an imbecile. She is even more foolish than the son. The next child was a son, who is perfectly normal. The next child was a son, who is an imbecile and walks the streets constantly. Next were twins, daughters who are normal. And the last child, a son, who is also an imbecile, walking the streets constantly. [diagram]
Copyright 1999-2004: Cold Spring Harbor Laboratory; American Philosophical Society; Truman State University; Rockefeller Archive Center/Rockefeller University; University of Albany, State University of New York; National Park Service, Statue of Liberty National Monument; University College, London; International Center of Photography; Archiv zur Geschichte der Max-Planck-Gesellschaft, Berlin-Dahlem; and Special Collections, University of Tennessee, Knoxville.
The images and text in this Archive are solely for educational and scholarly uses. The materials may be used in digital or print form in reports, research, and other projects that are not offered for sale. Materials in this archive may not be used in digital or print form by organizations or commercial concerns, except with express permission.