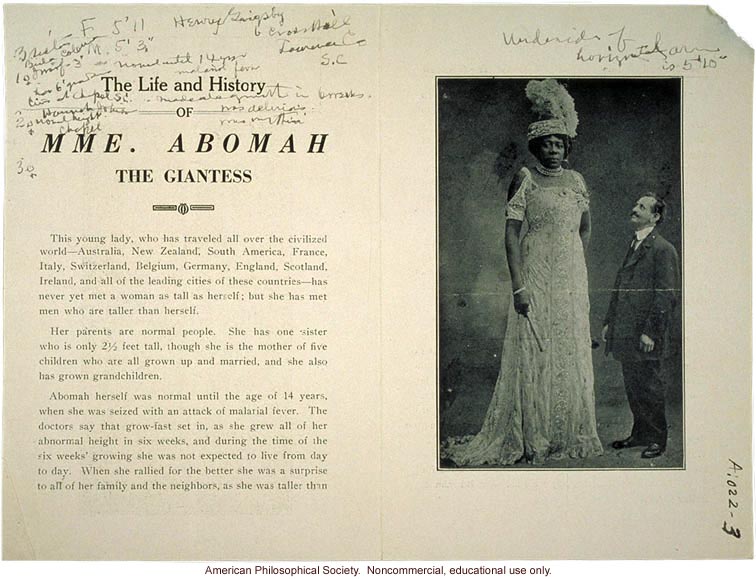 [Partly illegible handwritten notes, including handwritten note on image 837] [Handwritten note image 836] Henry Gaigsby 6 Cross [illegible] [illegible] Co. S. C. F 5 ft. 11 ins. M 5 ft. 3 ins. 3 sisters [illegible] 1 [venus symbol] has 6 [grandchildren?] normal until 41 years malarial fever [illegible] growth in 6 weeks was delirious Undersides of horizontal arms is 5 ft. 10 ins. [end handwritten note on image 836] [handwritten note on image 837] 7 ft. 6 ins. Tall Wh. 350 lbs [end handwritten note on image 837] The Life and History OF MME. ABOMAH THE GIANTESS This young lady, who has traveled all over the civilized world - Australia, New Zealand, South America, France, Italy, Switzerland, Belgium, Germany, England, Scotland, Ireland, and all of the leading cities of these countries - has never yet me a woman as tall as herself; but she has met men who are taller than herself. Her parents are normal people. She has one sister who is only two and a half feet tall, though she is the mother of five children who are all grown up and married, and she also has grown grandchildren. Abomah herself was normal until the age of fourteen years, when she was seized with an attack of malarial fever. The doctors say that grow-fast set in, as she grew all of her abnormal height in six weeks, and during the time of the six weeks' growing she was not expected to live from day to day. When she rallied for the better she was a surprise to all of her family and the neighbors, as she was taller than
Copyright 1999-2004: Cold Spring Harbor Laboratory; American Philosophical Society; Truman State University; Rockefeller Archive Center/Rockefeller University; University of Albany, State University of New York; National Park Service, Statue of Liberty National Monument; University College, London; International Center of Photography; Archiv zur Geschichte der Max-Planck-Gesellschaft, Berlin-Dahlem; and Special Collections, University of Tennessee, Knoxville.
The images and text in this Archive are solely for educational and scholarly uses. The materials may be used in digital or print form in reports, research, and other projects that are not offered for sale. Materials in this archive may not be used in digital or print form by organizations or commercial concerns, except with express permission.