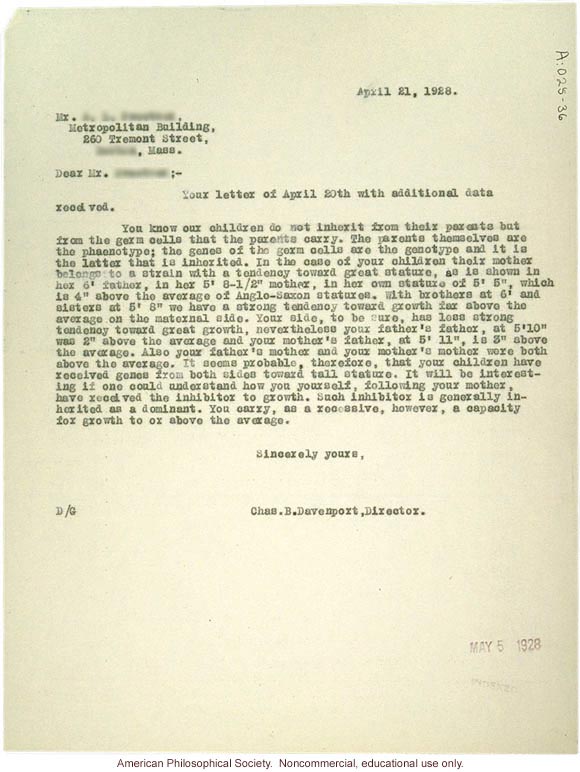 [marginalia]A:025-36[end marginalia] April 21, 1928 Mr. [obscured] Metropolitan Building, 260 Tremont Street, [obscured], Mass. Dear Mr. [obscured];- Your letter of April 20th with additional data received. You know our children do not inherit from their parents but from the germ cells that the parents carry. The parents themselves are the phenotype; the genes of the germ cells are the genotype and it is the latter that is inherited. In the case of your children their mother belongs to a strain with a tendency toward great stature, as is shown in her 6' father, in her 5'8 1/2" mother, in her own stature of 5'5", which is 4" above the average of Anglo-Saxon statures. With her brothers at 6' and her sisters at 5'8" we have a strong tendency toward growth far above the average on the maternal side. Your side, to be sure, has less strong tendency toward great growth, nevertheless your father's father, at 5'10" was 2" above the average and your mother's father, at 5'11", is 3" above the average. It seems probable, therefore, that your children have received genes from both sides toward tall stature. It will be interesting if one could understand how you yourself, following your mother, have received the inhibitor to growth. Such inhibitor is generally inherited as a dominant. You carry, as a recessive, however, a capacity for growth to or above the average. Sincerely yours, Chas. B. Davenport, Director. D/G MAY 5 1928
Copyright 1999-2004: Cold Spring Harbor Laboratory; American Philosophical Society; Truman State University; Rockefeller Archive Center/Rockefeller University; University of Albany, State University of New York; National Park Service, Statue of Liberty National Monument; University College, London; International Center of Photography; Archiv zur Geschichte der Max-Planck-Gesellschaft, Berlin-Dahlem; and Special Collections, University of Tennessee, Knoxville.
The images and text in this Archive are solely for educational and scholarly uses. The materials may be used in digital or print form in reports, research, and other projects that are not offered for sale. Materials in this archive may not be used in digital or print form by organizations or commercial concerns, except with express permission.