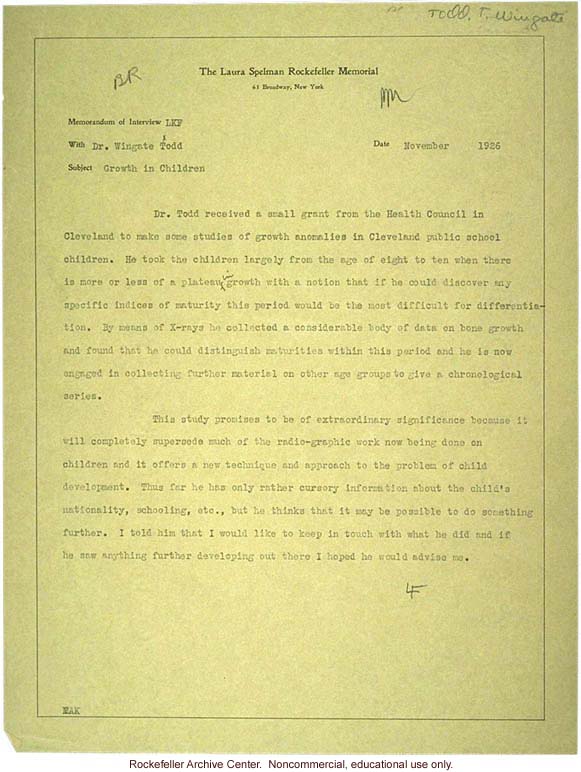 [marginalia]Todd, T. Wingate[end marginalia] The Laura Spelman Rockefeller Memorial 61 Broadway, New York Memorandum of Interview LKY With Dr. Wingate Todd Date November 1926 Subject Growth in Children Dr. Todd received a small grant from the Health Council in Cleveland to make some studies of growth anomalies in Cleveland public school children. We took the children largely from the age of eight to ten when there is more or less of a plateau in growth with a notion that if he could discover any specific indices of maturity this period would be the most difficult for differentiation. By means of X-rays he collected a considerable body of data on bone growth and found that he could distinguish maturities within this period and he is now engaged in collecting further material on other age groups to give a chronological series. This study promises to be of extraordinary significance because it will completely supercede much of the radio-graphic work now being done on children and it offers a new technique and approach to the problem of child development. Thus far he has only rather cursory information about the child's nationality, schooling, etc., but he thinks that it may be possible to do something further. I told him that I would like to keep in touch with what he did and that if he saw anything further developing out there I hoped he would advise me. [signed initials]LF
Copyright 1999-2004: Cold Spring Harbor Laboratory; American Philosophical Society; Truman State University; Rockefeller Archive Center/Rockefeller University; University of Albany, State University of New York; National Park Service, Statue of Liberty National Monument; University College, London; International Center of Photography; Archiv zur Geschichte der Max-Planck-Gesellschaft, Berlin-Dahlem; and Special Collections, University of Tennessee, Knoxville.
The images and text in this Archive are solely for educational and scholarly uses. The materials may be used in digital or print form in reports, research, and other projects that are not offered for sale. Materials in this archive may not be used in digital or print form by organizations or commercial concerns, except with express permission.