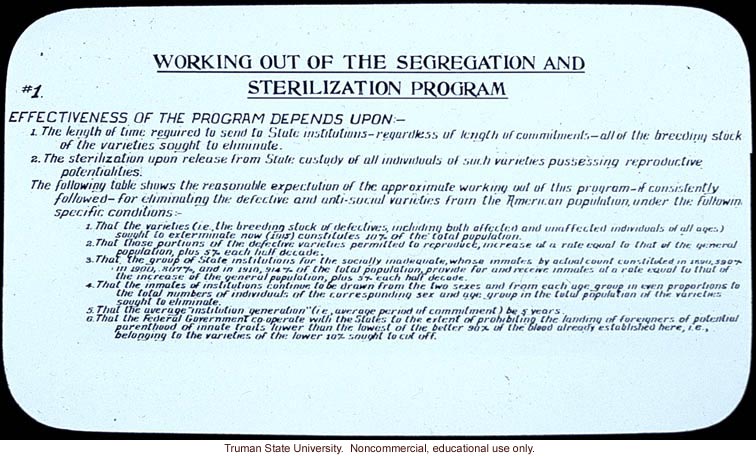 Working out of the Segregation and Sterilization Program #1 Effectiveness of the Program depends upon - 1. The length of time required to send to State institutions - regardless of length of commitments - all of the breeding stock of the varieties sought to eliminate. 2. The sterilization upon release from the State custody of all individuals of such varieties possessing reproductive potentialities. The following table shows the reasonable expectation of the approximate working out of this program - if consistently followed - for eliminating the defective and anti-social varieties from the American population under the following specific conditions:- 1. That the varieties (i.e., the breeding stock of defectives, including both affected and unaffected individuals of all ages) sought to exterminate now (1915) constitutes 100% of the total population. 2. That those portions of the defective varieties permitted to reproduce, increase at a rate equal to that of the general population, plus 5% each half decade. 3. That the group of State institutions for the socially inadequate, whose inmates, by actual count constituted in 1890, 590% in 1900, 807%, and in 1910, 914% of the total population, provide for and receive inmates at a rate equal to that of the increase of the general population, plus 5% each half decade. 4. That the inmates of institutions continue to be drawn from the two sexes and from each age group in even proportions to the total numbers of individuals of the corresponding sex and age group in the total population of the varieties sought to eliminate. 5. That the average "institution generation" (i.e., average period of commitment) be 5 years. 6. That the Federal Government co-operate with the States to the extent of prohibiting the landing of foreigners of potential parenthood of innate traits lower than the lowest of the better 90% of the blood already established here, i.e., belonging to varieties of the lower 10% sought to cut off.
Copyright 1999-2004: Cold Spring Harbor Laboratory; American Philosophical Society; Truman State University; Rockefeller Archive Center/Rockefeller University; University of Albany, State University of New York; National Park Service, Statue of Liberty National Monument; University College, London; International Center of Photography; Archiv zur Geschichte der Max-Planck-Gesellschaft, Berlin-Dahlem; and Special Collections, University of Tennessee, Knoxville.
The images and text in this Archive are solely for educational and scholarly uses. The materials may be used in digital or print form in reports, research, and other projects that are not offered for sale. Materials in this archive may not be used in digital or print form by organizations or commercial concerns, except with express permission.